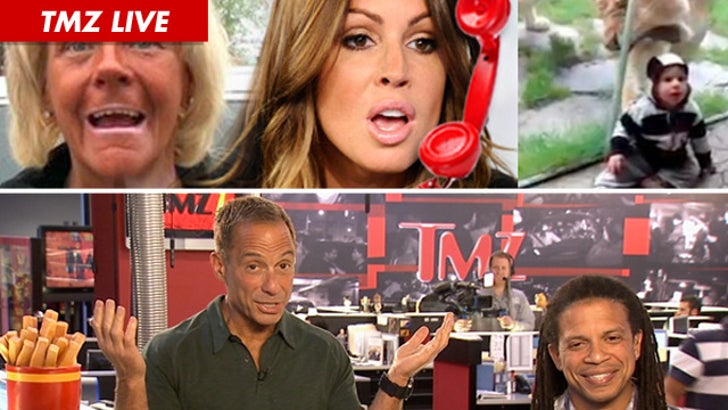 Tanning Mom (love that nickname) went off on her critics today ... claiming her arrest for allegedly putting her kid in a sunbed is just a "witch hunt." Sure, she sounds a little nuts -- but does is it possible she's got a point?

Plus, ready-to-pop Rachel Uchitel calls in to talk about her nearly-nude photos ... just EIGHT days before giving birth. Also, Vanessa Williams gets an apology from "Toddlers & Tiaras" mom Wendy Dickey -- and a hungry lion comes thaat close to snacking on a toddler!

(0:00) The shockingly tan mom accused of putting her kid in a tanning bed thinks she's the victim of a witch hunt -- we have video of her going OFF.
(6:30) Wendy Dickey from "Toddlers and Tiaras" -- who ripped Vanessa Williams for taking a shot at pageant moms -- calls in ... and totally backtracks on her statements.
(9:45) Rachel Uchitel dials us up to talk about her sexy, topless ... pregnancy photos.
(15:37) Did Michael Jackson's estate make a deal with the devil by teaming up with Pepsi? Remember, MJ was shooting a commercial for Pepsi in 1984 when his hair caught on fire ... after which he became addicted to painkillers ... and never got over it.
(18:45) Stacy Kiebler has officially been Cloonified -- after being given A-list treatment at a Coldplay concert ... and giving up on her outgoing ways..
(21:00) Miley Cyrus adopts an adorable dog she found outside of a Wal-Mart ... and speaking of pet adoption ... Harvey's about to get a new pup as well!
(25:52) Gossip magazines all chose to have Kardashians on their covers ... and they all got their stories wrong!
(28:12) Lindsay Lohan may be out of the woods in connection with that whole hit-and-run incident.
(31:05) Ryan Seacrest is unloading a gorgeous home ... and Harvey's seen it first-hand.
(35:25) Breaking news -- Kevin Federline sued to allegedly trashing his old house. (36:45) Ashton Kutcher accused of being in a racist commercial ... but no one in the newsroom agrees that it's offensive.
(40:01) Hilarious video -- parents dress their kid up like a little zebra ... and then put it next to the glass outside of a lion's cage.
(41:47) We take your calls!