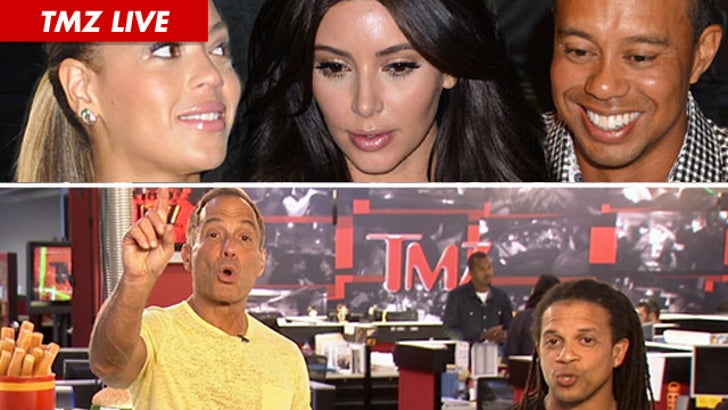 So, Beyonce writes a diary about her extended vacation ... now she's an award-winning journalist?! We're calling BS on the group that's giving her the hardware -- and you gotta see the debate this sets off in the newsroom.
Plus, Kris Humphries and Kim Kardashian's divorce lands in court -- and Kim is NOT going to like where this is heading. Also, Tiger Woods back in Vegas (bad idea?) ... and George Clooney's $12 MILLION gift to the Prez.

(0:00) The 911 call made by Junior Seau's girlfriend when she found his body was just released -- and it's heartbreaking.
(5:30) More sad news -- Beastie Boys legend MCA Adam Yauch died tragically today after complications with cancer.
(8:15) Kris Humphries is dragging out his divorce with Kim Kardashian because he loves the attention ... so says her high-powered lawyer Laura Wasser.
(10:30) George Clooney is about to make President Obama around $12 million ... does anyone have a problem with the POTUS' celebrity hobknobbing?
(15:37) "Bachelor" host Chris Harrison is getting a divorce ... is this the final proof needed for the show's relationship curse?
(18:45) We just can't look away from Tanning Mom no matter how hard we try -- especially when she rips Snooki apart ... or, as she calls her ... "Snoopy."
(21:00) Tiger Woods -- back partying in Vegas ... but being very careful about it this time around.
(25:52) Ted Nugent goes OFF on a reporter ... all to prove he's a real nice guy at heart. You gotta see this video.
(28:12) Beyonce is up for a JOURNALISM award -- so Harvey performs a dramatic reading about the ground-breaking article on ... eating pizza.
(31:05) A brand new pageant mom has emerged in the UK ... and she might be the worst of them all.
(35:25) Justin Timberlake regrets his NSYNC fashion days ... so we take a stroll down horrible outfit memory lane. (36:45) A North Carolina pastor unleashes a violent homophobic sermon ... the says it was totally taken out of context. Sure it was.
(40:01) The hooker that hooked up with a Secret Service agent says she could've stolen vital information. (41:47) We take your calls!