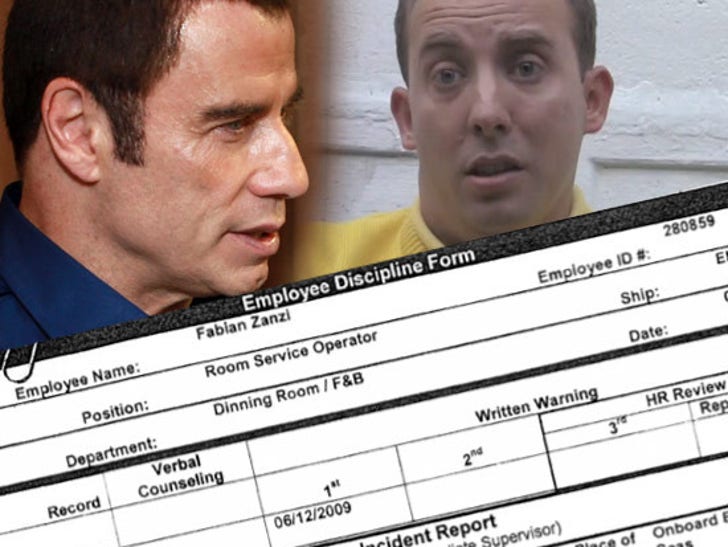 John Travolta asked a room steward on a Royal Caribbean cruise line to give him a neck massage in his stateroom back in 2009 ... this according to an official incident report obtained by TMZ, but the documents don't mention anything about any overt sexual overture on Travolta's part.

The steward, Fabian Zanzi, claims he was delivering something to Travolta's stateroom when the actor asked him for a neck massage. Although the report doesn't expressly name Travolta, we've confirmed the actor was indeed the guest in question.

Fabian claimed he obliged -- and Travolta "then told him he was a beautiful person and invited him to return to visit him later that night."

Fabian claimed he refused because of a strict company policy banning RC employees from fraternizing with guests.

Fabian reported the incident and was disciplined for the neck massage, which is a violation of the no-fraternization rule. He subsequently left the company.

Fabian now says the encounter was much more than described in the incident report, claiming Travolta opened his robe and gave him a big hug while his penis was erect ... and offered him $12,000 for sex and silence.

The video of Fabian (above) was shot yesterday.

Travolta's attorney Marty Singer tells TMZ, "The incident report now confirms Mr. Zanzi fabricated his story about my client. He never stated that my client did anything wrong. Obviously, if he had engaged in any inappropriate conduct he would have reported it to his supervisors."

The rep claims Fabian was NOT fired by the cruise company, but rather resigned on May 18, 2011 -- two years after the alleged incident.