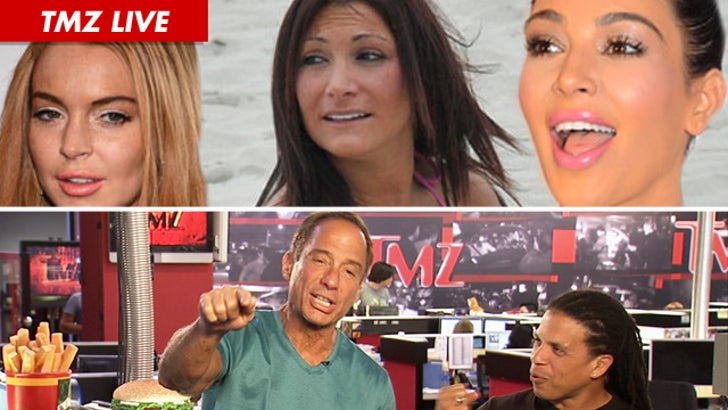 Lindsay Lohan blatantly lies to cops about her latest car crash -- and now she could face jail time for an otherwise harmless accident (minus the totaled Porsche). We've got eyewitnesses revealing what really went down on PCH.
Plus, the role of Snooki will now be played by Deena Cortese ... whose drunken arrest capped a crazy weekend on the "Jersey Shore." You gotta see our video of the cast becoming a live circus act.
Also, does Kim Kardashian's $750,000 gift to Kanye West -- a stupidly rare Lamborghini -- seem like overkill for a bf of just a few months? It does if your name is Kris Humphries!! Oooh ... burn.

(0:00) Lindsay Lohan caught lying to cops about her car accident -- which could land her in a huge heap of trouble ... instead of being a minor pain in the butt. What was the point of lying?
(5:52) An eyewitness to Lindsay's crash calls in.
(10:12) Deena is the new Snooki on "Jersey Shore" -- getting arrested for acting like an idiot. Plus, two other cast members get into a nasty fistfight.
(13:30) Kris Humphries is desperately trying to make sure his rebound chick keeps her mouth shut -- which bring up a glaring question ... what does he have to hide? Mike has an idea.
(19:55) David Arquette gets Bar Mitzvah'd on a whim ... some people think he cheated the system.
(23:20) Kim and Khloe K. say they're not responsible for the fact that QuickTrim was a scam ... and, for some reason, this sparks a very heated debate.
(29:40) Madonna -- too old to be flashing her boob in public? We have video ... decide for yourself.
(33:01) Sarah Jessica Parker and "Sex and the City" creator Darren Star are having dueling fundraisers for President Obama in NYC.
(40:25) We take your calls!