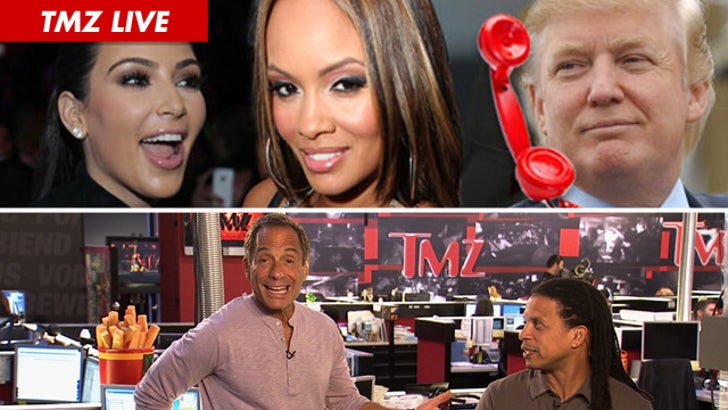 Plus, Donald Trump calls in to blast an all-new allegation of Miss USA cheating -- and Evelyn Lozada joins us to confess ... she's been a bad, bad girl. Why she and Shaunie O'Neal want to "clean up" their "Basketball Wives" act!

(0:00) Kanye West allegedly tweets a naked picture of Kim Kardashian -- but it ended up being an elaborate hoax. Turns out ... it was just some other hot chick with a great butt who's had sex on tape.
(3:15) Kanye West's L.A. home was burglarized -- and we have all the details.
(5:00) Donald Trump calls in to squash the drama surrounding the Miss USA pageant -- after a SECOND contestant alleges the competition was fixed.
(10:30) Breaking news -- John Edwards just stuck it to the Federal government ... we'll tell you how.
(11:50) Piers Morgan gets an exclusive interview with Casey Anthony -- who's publicly claiming innocence for the first time ... among a few other bizarre statements.
(16:00) Lindsay Lohan is a massive insurance liability on her new movie. So why take the risk?
(19:15) "Basketball Wives" star Evelyn Lozada calls in to explain why she's decided to tame down her violent ways on the show.
(24:00) Breaking news -- Lance Armstrong was just slapped with a ton of charges connected to his never-ending doping allegations.
(26:00) Khloe Kardashian is trying to have a baby -- Octomom style. Let's hope she gets different results.
(29:20) We asked both Courtney Cox and David Arquette about their divorce ... but only one had something to say about.
(33:45) The first photos of a post-baby Jessica Simpson come out -- sparking another argument about her Weigh Watchers intentions.
(35:31) The Stanley Cup -- been around the block too many times to drink chocolate milk out of? We go through a list of the nasty things it's been through ... and yes, poop is involved.
(38:50) Madonna shows off another body part during a concert ... and it's not getting the same positive reviews as it used to.
(40:25) We take your calls!