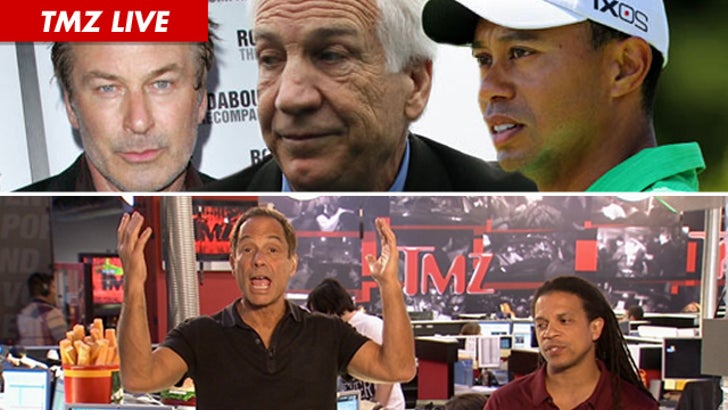 TMZ Live
After Alec Baldwin's latest battle with a newspaper photog we have just 2 questions: was Alec just defending his personal space -- and will Alec turn it into a big joke ... again. 'Memba the Words with Friends fiasco?

Plus, why didn't NBC air the Jerry Sandusky soundbite that makes him sound waaay more guilty than he already does -- and more importantly ... why didn't prosecutors use it in court??!!
Also, Tiger Woods is back to making multi-millions in endorsements. You gotta hear how much ... and see which other sports bad boys are, apparently, totally forgiven.

(0:00) Alec Baldwin is accused of attacking a New York Daily News photographer -- and it's a case of he said/he said ... but Alec's hot-headed past makes it tough to put the blame on the photog.
(5:05) This is beyond shocking -- NBC buried a portion of Bob Costas' interview with Jerry Sandusky ... in which the former PSU coach basically admits to molesting boys. How did they screw that up so badly?
(10:00) Kim Kardashian is now recruiting Kris Humphries' ex-girlfriend Myla -- and using her as ammo in bitter divorce battle with Kris. The question on everyone's mind ... what does Myla know?
(16:10) Mike Tyson gives one of the greatest interviews of all-time -- talking about how he used to be a "prostitute hunter" ... and Ann Curry ruins it by vehemently trying to change the subject.
(18:40) Rodney King's good friend Damon Feldman calls in to say there's something real fishy about Rodney's death ... and he even goes on to say he believes his buddy was murdered.
(21:10) Kevin Costner is involved in a really, really rich people battle.
(26:30) Drake is already back on the club scene following his bloody bar brawl with Chris Brown -- our newsroom gets heated on whether or not he should've stayed quiet for longer.
(30:35) Insuring Lindsay Lohan for "Liz and Dick" was a nightmare -- and she broke one of the most important rules she was supposed to follow ... don't drive. Ever. Ever ever.
(33:05) Timothy Busfield wins a big one for alleged gropers everywhere.
(39:00) What do Floyd Mayweather, Tiger Woods, and Kobe Bryant have in common? They're all three some of the top earning athletes of the year ... despite their checkered past. Do beloved athletes really get that big of a pass?
(42:00) We take your calls!