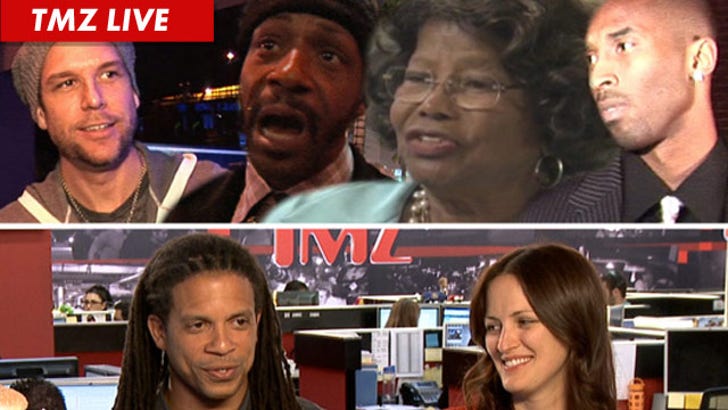 Dane Cook cracks a "Batman" movie massacre joke at a comedy club -- and pisses off the vast majority of the country. Although people in the club did laugh ... is this too soon? Fellow comedian Katt Williams calls in to defend Dane.


Plus, Katherine Jackson's agreed to share guardianship of Michael's children with TJ Jackson -- so finally ... the whole family's happy, right? Nope. We'll tell you why the family feud is a long way from being over.
And Kobe Bryant was spotted in a Barcelona nightclub chatting up two chicks! Harmless convo ... or almost-single guy looking to mingle?

(0:00) Katherine Jackson agrees to be co-guardians with TJ Jackson -- you'd think that would put out the family fire ... but Randy Jackson is still raging.
(8:30) Finally ... La Toya emerges! .
(11:20) Gladys Knight makes the most ridiculous comment on "The Talk" -- saying if 14-year-old Paris Jackson would've blasted her like she did Janet Jackson ... she'd have knocked Paris' teeth out.
(18:00) Dane Cook make a joke about the "Batman" massacre on stage last night -- fellow comedian Kat Williams calls in to defend him.
(26:20) Simon Cowell drops $500k to put over a hundred "X Factor" contestants in a swanky Miami hotel -- which sounds like a lot of money ... until you realize how rich he is.
(29:00) Kobe Bryant was spotted talking to two chicks at a club in Barcelona -- time to speculate!
(32:00) The US Olympic uniforms ... are hideous ... to everyone but Anna.
(35:00) A legally blind Olympian set a world record today -- in archery! Gary smells a rat.
(37:00) Recently ousted "Big Brother" contestant Willie Hantz has a perfectly ridiculous excuse for his DUI arrest.
(40:00) Conrad Murray wants to talk to Katherine Jackson -- and he's the only one who thinks it's a good idea.
(43:00) We take your calls!