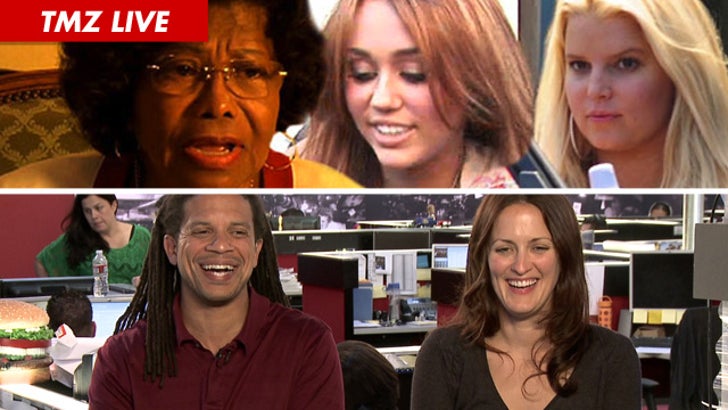 Katherine Jackson wants the judge to know ... she's a competent guardian for Michael Jackson's children -- and to prove it she spelled out the details of her strange journey to Arizona last month. Question is ... are you buying her NEW version of the story?
Plus, Miley Cyrus became the latest victim of "swatting" -- we'll explain how cops are trying to catch the creep who falsely reported an armed hostage situation at Miley's house.
And, is Jessica Simpson's weight loss program working? The latest shots of Jess sparked a battle in the news room ... over her figure, and her fashion choices.

00:00 - Katherine Jackson says she was duped into a visit to Arizona, where she was blocked from contacting her own grandchildren!
10:35 - Katy Perry was spotted out on the town last night with a new man-- and let's just say she isn't his first famous date...
13:51 - Miley Cyrus' house was on red alert last night-- Find out why the SWAT team was called in.
18:31 - With the Olympics in full swing, Ryan Lochte is getting plenty of attention right now-- so why's his mom blabbing about his sex life?!
21:27 - Casper Smart & JLo are fuming over reports he was caught at a gay sex club-- but it looks like he was only getting a little trim.
25:17 - Embroiled in a nasty custody battle, Usher's ex-wife Tameka Foster calls radishes on the superstar's sympathy for her dead son.
28:42 - Cuba Gooding, Jr. catches a big break in The Big Easy as the bartender he allegedly pushed drops her charges.
31:37 - Jessica Simpson surfaces in a get-up so eye-popping, we're still struggling to find the words.
36:06 - Don't believe everything you read-- Macaulay Culkin insists he's NOT hopped up on heroin.
38:11 - Michael Phelps has more medals than ANY OLYMPIAN EVER-- and even better, he might not have to look for work when he's done competing!
42:06 - We take your calls!