When God closes a door, he opens a window and in Kate Gosselin's case ... that window is a job offer that would involve her hosting her own show in the nude!!!

Gosselin was axed this week from her gig as a blogger for the website CouponCabin.com after the CEO said she was no longer "a good fit" for the company.

In an offer letter to Gosselin obtained by TMZ, Vivid honcho Steven Hirsch says the gig (which wouldn't be all-nude all the time) would allow her to have a flexible schedule so she could spend plenty of time with her brood.

Gosselin is at the top of Vivid's list, with Hirsch saying, "We have binders of women who would love the job, but you're definitely our first choice." 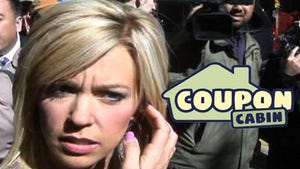