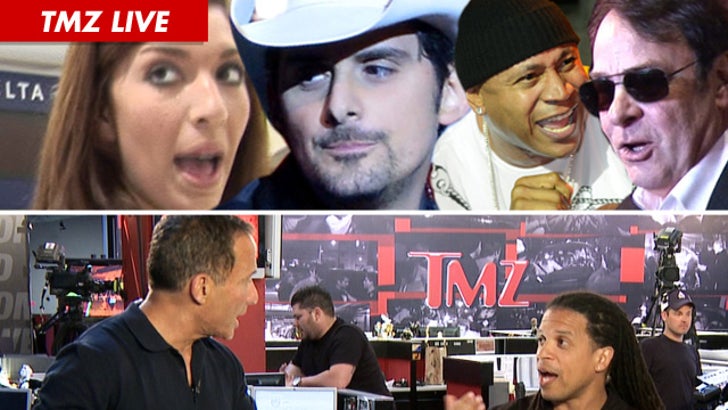 (0:00) James Deen spills the beans on Farrah Abraham's porn shoot -- but she's STILL denying it.
(7:00) How refreshing ... Snooki says being pregnant is disgusting.
(10:00) Brad Paisley and LL Cool J's hearts were in the right place when they wrote "Accidental Racism" ... it's just the execution was horrible.
(14:00) Gay rapper Nicky Da B joins us to take a stand against Snoop Lion's comment that there's no place for gay rappers.
(18:00) Dan Aykroyd calls in to talk about how he's teaming up with the Rolling Stones ... and breaks some awesome news about the next "Ghostbusters" movie.
(23:00) Dick Gregory says the backlash over Beyonce and Jay-Z's Cuba trip was motivated by racism ... but no one's really buying it.
(27:00) Lindsay Lohan had the cajones to skip out on another deposition ... to go eat sushi in NYC.
(31:00) Rick Ross is really taking heat now for his rape song -- a group is fiercely protesting his Reebok sponsorship.
(33:00) Scary situation for Clay Aiken -- our resident Claymate chimes in to explain.
(36:00) The floor is yours!
(41:00) The house where the Playboy bunnies live is for sale for $11 million.