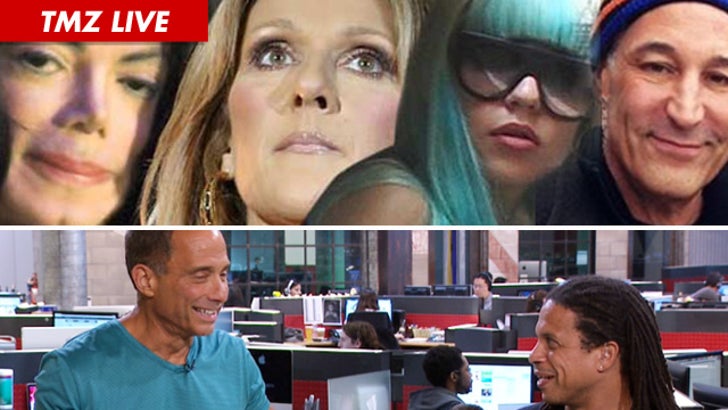 Who would ever claim Celine Dion is a bigger star than Michael Jackson? Just an AEG exec trying to get out of paying BILLIONS to MJ's mother and kids. But this testimony could blow the whole trial for AEG, and we'll explain why.
Plus, Amanda Bynes' parents file for a conservatorship ... while her strange behavior continues during her treatment in a hospital. What are the chances her family will be able to save her ... like Britney's folks did?
And, legendary "Simpsons" co-creator Sam Simon has been diagnosed with terminal cancer -- and joins us to explain why he's bravely chosen to dedicate his time making the world a better place to live.

(0:00) Mchael Jackson vs Celine Dion -- who's the bigger star?
(8:00) Tommy Chong tries to defend his daughter Rae Dawn Chong's n-word rant about Oprah ... and just digs himself his own hole.
(10:00) Amanda Bynes disturbing behavior while under a 5150 hold.
(15:00) 10 Black "American Idol" contestants each want $25 mil for alleged discrimination by the show's producers.
(18:00) Sam Simon joins us to talk about his brave battle with terminal cancer.
(24:00) Breaking news ... Amanda Bynes parents are moving for a conservatorship.
(26:00) Anthony Weiner -- we got ahold of photos of his latest sexting partner.
(29:00) Paula Deen -- more accusations of racism ... this time involving Aunt Jemima.
(32:00) "Hardcore Pawn: Chicago" stars join us to explain why the guy from Survivor showed up to give them an acoustic rendition of "Eye of the Tiger."
(36:00) The floor is yours!
(41:00) It's time again for Tim's rejected pitches of the week.