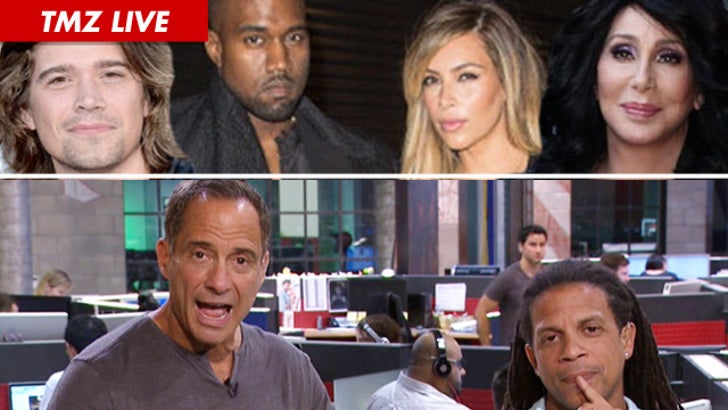 TMZ Live
Zac Hanson got blasted by an angry fan who unleashed a giant loogie into the Hanson's tour bus ... all in sight of cameras. Is there anything more revolting? And should the spitter be prosecuted for assault?
Plus, Kim Kardashian and Kanye West flew off to Paris ... withOUT baby North. Too soon to separate from a 3-month-old infant?
And, Cher says Sonny Bono's ghost haunts her mansion -- we talk to "Ghost Hunters" star Adam Berry about it ... and the time Harvey says he was terrorized by a spirit that haunted his home electronics a few decades ago.

(0:00) Zac Hanson spit on by a dude who boarded his tour bus -- we have video ... and a first-hand account of incident.
(7:00) Lamar Odom thinks he's gonna play basketball somewhere THIS SEASON.
(10:00) JWOWW calls Gov. Chris Christie "retarded" -- poor use of words ... but is her criticism spot-on?
(14:00) Score one for Kevin Federline ... Britney Spears will not have her sons dance on stage at her Las Vegas concerts.
(18:00) Cher thinks Sonny's ghost is haunting her ... "Ghost Hunters" star Adam Berry joins us to figure it all out.
(24:00) Kim and Kanye leave their baby behind to go to fashion week in Paris ... and people are OUTRAGED.
(29:00) Jay-Z says dealing crack helped him learn how to run a business. So why does he get a pass when others don't ... for less.
(32:00) Former porn star Kimberly "Houston" Halsey joins us to explain how she's having a tough time keeping non-porn jobs once people figure out who she is.
(36:00) The floor is yours!
(41:00) Harvey's psychic from 20 years ago joins us to explain his own run-ins with a so-called haunting ... of his electronics in the 90s.