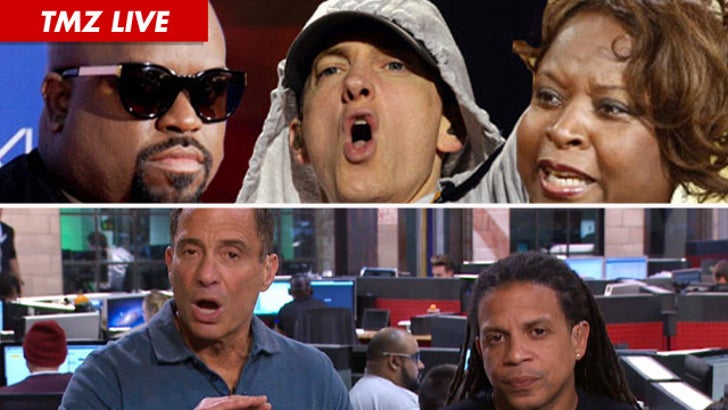 TMZ Live
CeeLo Green's alleged rape case is finally coming to an end -- more than a year after the woman's initial claim, he will NOT be charged with sexual assault -- but ecstasy is another story.
Plus, Eminem's album and new song "Rap God" are being hailed as one of his best ever -- even though it includes a ton of gay slurs. Em thinks he should get a pass because he supports gay marriage. You buying that?
And, Robin Quivers joins to explain her incredible battle with cancer -- and to take a hilarious shot at Rush Limbaugh for dissing Howard Stern.

(0:00) CeeLo Green's rape charge was dropped -- but he's getting hit with a felony drug charge now ... and it's pretty shocking.
(6:00) The plot thickens over Kylie and Kendall Jenner's underage appearance at a 21+ club.
(10:00) Robin Quivers joins to explain her incredible battle with cancer -- and to take a hilarious shot at Rush Limbaugh for dissing Howard Stern.
(14:00) Dr. Conrad Murray ... looking for representation!
(18:00) Lamar Odom -- signs he's back on the right track?
(24:00) Justin Bieber had a hell of a weekend -- strippers, cash, partying, booze and a whole lot more!
(29:00) Kanye West supports Kim's naked photos shoots -- and then accidentally shows too much skin himself.
(32:00) Eminem's homophobic lyrics ... why is he getting a pass this time around?
(36:00) The floor is yours!
(41:00) Beyonce's death-defying fall!