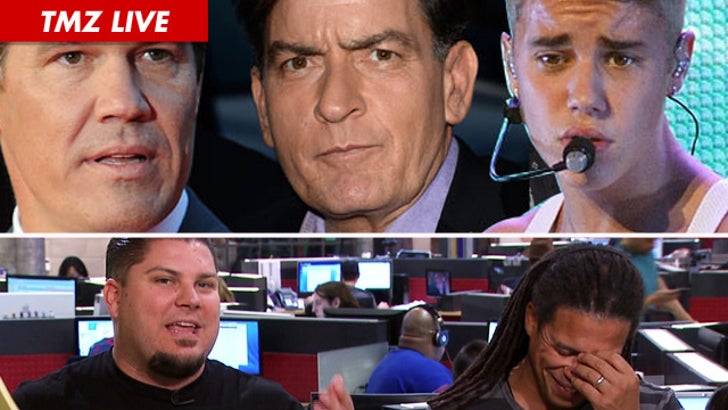 TMZ Live
Josh Brolin seemed to be looking for a fight -- and he found it ... TWICE! We got video of the actor brawling with a bouncer and raging out at a cab driver. Just harmless night of drinking, or a bad pattern for Brolin?
Plus, Charlie Sheen takes no prisoners -- he lashes out at the judge controlling his fate after picking an epic fight with Brooke Mueller and Child Services ... and it works! Only Charlie could manage this.
And, some people think Justin Bieber's antics are douchey, but others -- like Metallica -- think he's actually just acting like a true rock star. Rock legend Dee Snider joins us to help us figure it out.

(0:00) Two more of Josh Brolin's drunken rampages were caught on video -- at what point is he gonna take it too far?
(6:00) Oprah Winfrey's insane auction nets $600,000 ... you gotta hear what her fans spent boatloads of money on.
(10:00) Charlie Sheen parties -- and still finds to the time to pick more fights in his war against Brooke Mueller and Child Servies.
(18:00) Dee Snyder joins us to explain how Metallica members are Justin Bieber fans.
(24:00) Kerry Washington helps "SNL" poke fun at their lack of a Black female cast member -- funny take ... or wrong message?
(29:00) The Jackson family is worried about Conrad Murray practicing medicine after what he did to Michael.
(32:00) Pippi Longstocking's porn -- the worst marketing decision ever.
(36:00) The floor is yours!
(41:00) Charlie Sheen scores a victory against Brooke Mueller!