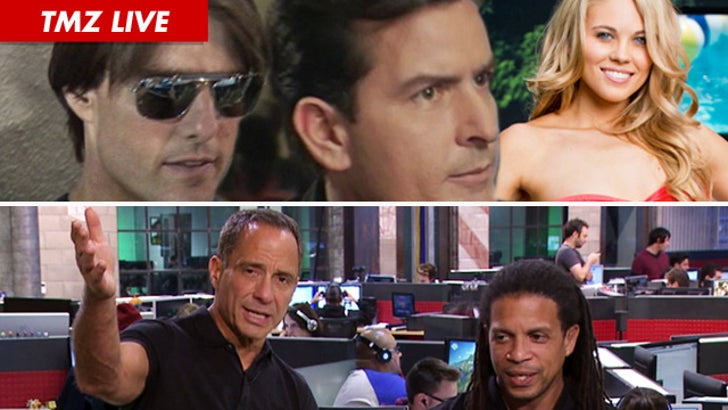 TMZ Live
Tom Cruise finally admits Scientology played a part in driving Katie Holmes away, and he's also admitting the divorce did make it difficult for him to spend time with Suri. It's all coming out because he chose to sue a tabloid ... so, ya think maybe he's regretting that decision?
Plus,Charlie Sheen and Brooke Mueller's twins are now off to a different home -- Brooke's brother Scott is their new guardian. Will he be the one who finally brings peace to their lives?
And, Aaryn Gries from "Big Brother" -- you know, the one who went on racial and homophobic rants -- joins us to explain how she's picking up the pieces ... and what she learned from the whole ordeal.

(0:00) Tom Cruise's war over a tabloid headline comes back to bite him -- when he's forced to answer a ton of questions about his long stretches without seeing Suri ... and Scientology.
(7:00) Deryck Whibley shocks us in two ways: 1) he took Avril Lavigne's name when they married 2) It's taken him almost four years since their divorce to change it.
(10:00) Denise Richards is throwing her hands up when it comes to taking care of Charlie and Brooke's twins ... forcing someone to come out of the woodwork to take her place.
(14:00) Justin Bieber jacks a bicycle while in the belly of a Las Vegas Casino ... and gets off with a slap on the wrist. Would you do it if you could get away with it?
(18:00) "Big Brother" star Aaryn Gries joins us to describe to backlash -- and lack-thereof -- after he racist and homophobic tirades while on the show.
(24:00) "Two and a Half Men" executive producer Chuck Lorre rips the workers who've been working on an LA highway -- igniting a traffic war in our newsroom.
(28:00) Chief Keef's totally random community service project.
(32:00) The star of a movie that should have never been made -- "Escape from Tomorrow" -- which was filmed guerrilla-style at Disney ... joins us to explain how they pulled it off.
(36:00) The floor is yours!
(41:00) Kim Kardashian and Kanye West take their baby ... and her butt ... out for a stroll!