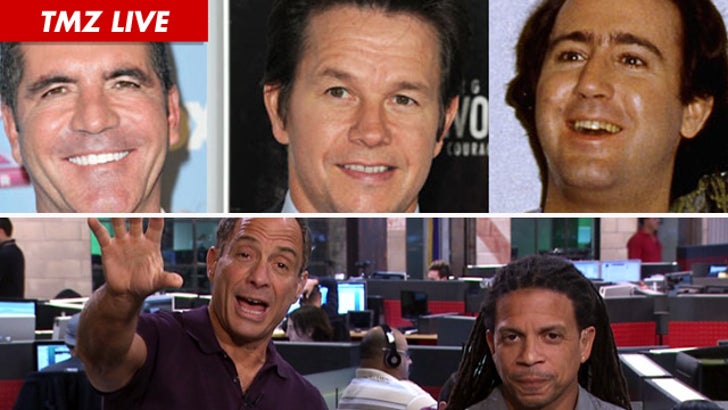 TMZ Live
Simon Cowell's name is all over the divorce of his baby mama Lauren Silverman -- a clear sign there's still really bad blood between Simon and his ex-pal Andrew Silverman. Can they bury the hatchet for their kid's sakes? Should they?
Plus, Mark Wahlberg softens his attack on Tom Cruise for comparing acting to fighting the war in Afghanistan ... and claims he wasn't specifically ranting against Tom. So, why the change of heart? Is Tom that powerful?
And, Andy Kaufman is alive!!! IF you believe the woman who claims to be his daughter ... and says he's A-OK and just keeping it on the low. You believe her?

(0:00) Simon Cowell can't go near his baby mama's other kid -- or her baby daddy will have their hides. In a nutshell ... it means war.
(6:00) Mark Wahlberg says he didn't know Tom Cruise was the actor who compared their job to being a soldier ... you buying what he's selling?
(10:00) Andy Kaufman is alive!!! IF you believe a lady who claims to be his daughter. We talk to a comedian who witnessed her revelation ... real or not.
(14:00) Zac Efron -- there was no 911 call made after he broke his jaw ... another sign there's something missing from his story?
(18:00) Joey Lawrence joins us -- after the Olsen twins raised a huge debate about how rich, successful, young actors still need to go to college.
(24:00) Justin Bieber -- desecrating the Argentine flag ... or just ridding the stage of terrible crap his fans were tossing from the crowd?
(29:00) Brooke Mueller's waging a war on two fronts now -- one with Charlie Sheen ... and the other with her former nanny who's suing the pants off of her.
(32:00) Miley Cyrus says she's the biggest feminist in the world -- and some people actually agree with her. Well, at least one person does.
(36:00) The floor is yours!
(41:00) It's time again for ... Tim's rejected pitches of the week!