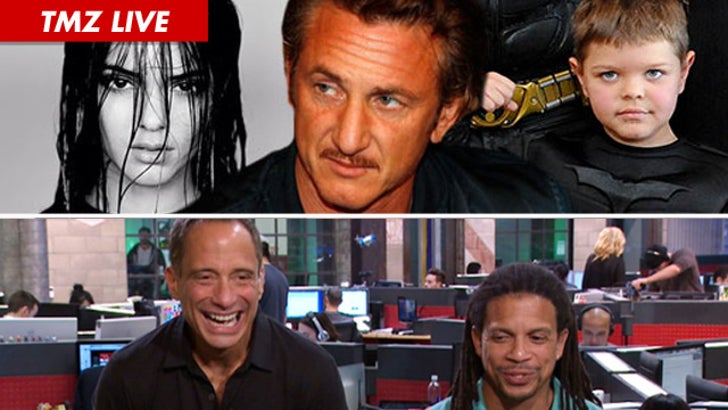 TMZ Live
Kendall Jenner shocked millions by posting her exposed nipples on the Internet -- but what's even more shocking is the fact her father Bruce Jenner is 100% cool with it! Or so he's saying. You buying that?
Plus, Sean Penn reams a fan -- threatening to make him "eat" his phone -- after the guy tried to take his picture in a hotel lobby. Is Sean's rage justified?
And, our anti-Batkid staffer has been pissing people off all week -- so it's time to get your revenge ... by reading your hate mail!

(0:00) Kendall Jenner has introduced the world to her nipples just two weeks after her 18th birthday ... and daddy approves!
(6:00) Sean Penn goes off on a guy for taking his picture ... was it deserved because of their location?
(10:00) Former Disney star Jake T. Austin may get out of his nasty hit-and-run thanks to his lawyer ... but we found out he's still on the hook for a DUI.
(14:00) Cee Lo Green's ecstasy case takes a weird turn.
(18:00) Famed screenwriter MIchael Elliot has opened a nail salon for men ... and it looks DOPE.
(24:00) Miley Cyrus and Miranda Kerr -- who knew they were besties?
(27:00) President Obama is taking a stand against Hollywood, one movie screening at a time.
(32:00) George Zimmerman -- a juror in the Trayvon Martin case says these latest run-ins with cops have changed her mind about him.
(36:00) The floor is yours!
(41:00) In a very special hate mail segment ... it's time to rip Derrick apart for his anti-Batkid rants.