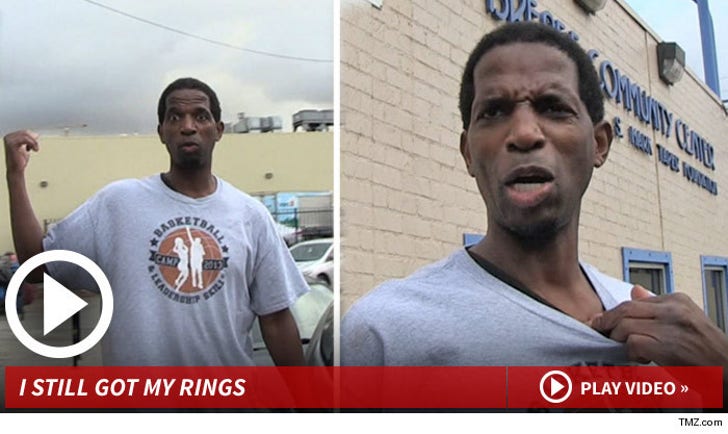 A.C. Green is calling BS on the Palos Verdes Police Department ... telling TMZ Sports his NBA championship rings were NEVER stolen from his home and cops got the whole thing wrong.

The whole thing is very bizarre ... but it started back in March when the Palos Verdes Estates police department told the media Green had filed a police report saying 3 of his rings were stolen from his home.

According to police, Green valued each of the gold and diamond rings (2 of which he earned during his playing days with the Lakers and the other was an honorary ring he got in 2009) at $25,000 a pop.

But when we saw Green out in L.A. yesterday and asked him about the investigation -- his response was baffling ... telling us he HAD THE RINGS BECAUSE THEY WERE NEVER STOLEN.

He explained, "Unfortunately, you were misinformed."

Problem is ... the cops were the ones who informed the media in the first place ... based on police reports allegedly filed by A.C. Green.

We called the Palos Verde Estates PD and one of the detectives told us ... the resurfacing of the rings was news to them.

The detective told TMZ Sports, "It was an inactive case because there have been no leads but it is still an open investigation. "

Cops say they plan to follow up with A.C. to get to the bottom of the situation.