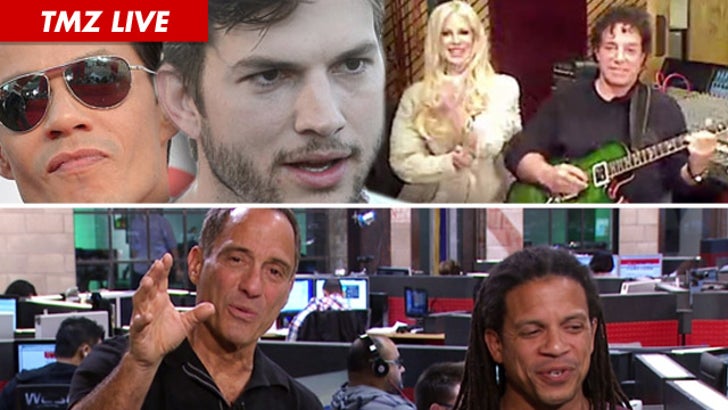 TMZ Live
Marc Anthony's got a serious ex-wives problem -- Dayanara Torres is demanding a huge increase in child support ... partially because Jennifer Lopez gets so much loot from Marc. Should DT get the same as J.Lo?
Plus, Ashton Kutcher goes off on paps ... just to sneak Mila Kunis out of a restaurant. Do you think she, or they, have something to hide?
And, Journey guitarist Neal Schon and former DC "Housewife" Michaele Salahi join us to explain what gave them the idea to put their wedding on Pay-Per-View.

(0:00) Marc Anthony's first baby mama wants a hell of a lot more money from him -- because he's forking over WAY more to J.Lo. Who's already rich, if you didn't know.
(6:10) Ashton Kutcher aggressively blocks photographers from shooting Mila Kunis ... but does she have something (in her belly) to hide?
(10:00) Paris Hilton says she's never made a dime off her sex tape -- would she really turn down that much money over some weird moral battle?
(14:00) President Obama pisses a lot of celebrities -- and regular folk -- by screwing up traffic in LA yet again.
(18:00) Vine superstar Rudy Mancuso joins us to talk about what it takes to make it online ... and it's not what you think.
(24:00) The death of Brian on "Family Guy" shocked the world -- so is it the real deal ... and is there another dog regular in the show's future?
(28:00) George Zimmerman's arsenal isn't as crazy as it seems ... to some people.
(32:00) Michaele Salahi and Neal Schon join us to explain why they're getting married on PAY-PER-VIEW.
(36:00) The floor is yours!
(41:00) Toronto Mayor Rob Ford -- future porn star?