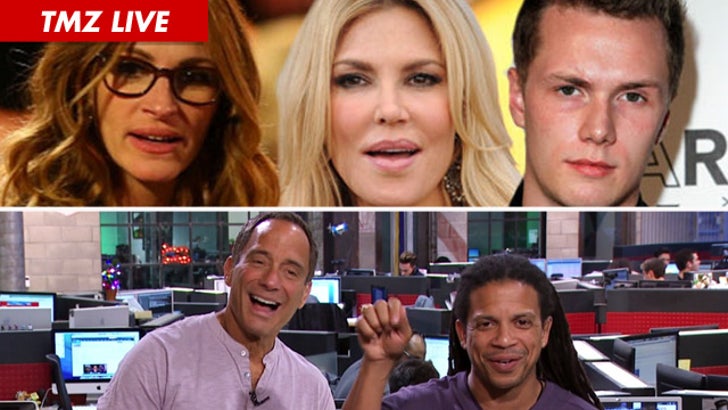 The new pics of Julia Roberts we posted have everyone wondering if she's expecting a baby again. Yes, she's a little older, but still totally possible. What's your take on the photos?
Plus, Brandi Glanville says Black people can't swim. Well, she said it kinda, sorta jokingly -- but now she's actually defending the statement! We all make race jokes sometimes, but did the 'Real Housewife' pick the wrong time and place?
And, Barron Hilton suddenly goes silent when cops want to questions him about the butt-kicking he says Lindsay Lohan orchestrated ... and we have a few ideas about his change of heart.

(0:00) Julia Roberts -- pregnant ... or just putting on pounds around her baby maker.
(5:30) Barron Hilton goes radio silent when cops want to question him about the bloody beatdown Lindsay Lohan allegedly ordered.
(10:00) Jay Z's emotional tribute to Nelson Mandela -- eerily similar to the one he did for Trayvon Martin. Is it okay to re-gift a tribute?
(14:00) Linda Hogan reveals a connection between her son and Paul Walker -- who were both involved in horrible car accidents.
(18:00) Shorty Rossi joins us to explain his epic fight with Jeff Beacher -- the guy who's clubs are a favorite of young, party heavy Hollywood.
(24:00) "Real Housewives" star Brandi Glanville makes a racist comment about Black people and swimming -- then tries to justify it by digging herself into a deeper hole.
(29:00) "Hairspray" director Adam Shankman checks into rehab -- which is shocking because he was close to Corey Montieth and Zac Efron.
(32:00) Selena Gomez helps out her friend Demi Lovato in the most amazing way.
(36:00) The floor is yours!
(41:00) Kim Kardashian compares herself to Liz Taylor -- could she possible be our generations LT?