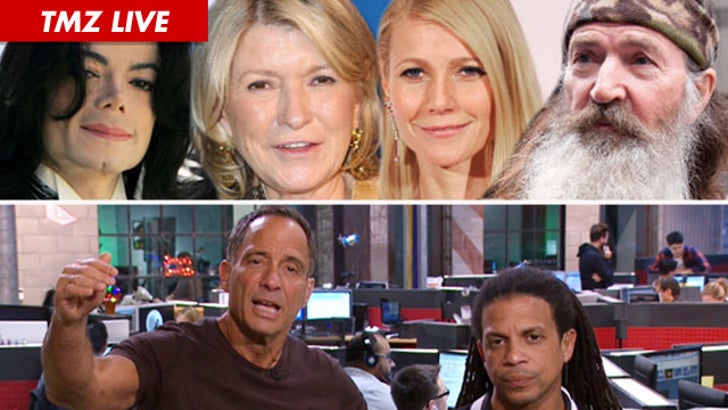 Michael Jackson's mom and dad want money to make a documentary about him -- only there's a major twist ... they want YOUR money. If that's not bad enough -- they're using his kids to beg for cash. We'll tell you everything else that's wrong with it ... and what MJ would have thought about it.
Martha Stewart​ threw some shade on Gwyneth Paltrow when we asked which one of them is the queen of lifestyle. So, Martha's choice is clear ... who you got?
Plus, "Duck Dynasty" star Phil Robertson says he doesn't get why homosexual men aren't into vaginas more -- and that they're going to Hell. He's trying to backpedal now, but are you buying it?

(0:00) Michael Jackson's family wants money -- we'll tell you this is their worst ploy for money yet ... and how mad Michael would have been about it.
(10:00) Martha Stewart takes a nasty shot at Gwenyth Paltrow -- but some people have Goop's back.
(15:00) Duck Dynasty star Phil Robertson's goes off on homosexuality -- we'll tell you what finally put him over the line and into homophobic teritory.
(18:00) George Zimmerman's painting sells for mega-bucks -- we'll tell you why it's not surprising.
(24:00) Justin Bieber gets super high and then says he's retiring from music -- you gotta hear him string sentences together while fully baked.
(29:00) Paul Walker's death -- Porshe is now helping to figure out what went wrong and caused the crash.
(32:00) Top Shot winner Chris Cheng joins us to explain why he decided to come out the closet -- in a very public fashion.
(36:00) The floor is yours!
(41:00) Time to prove we can take it better than we can dish it -- so we read your blistering hate mail!