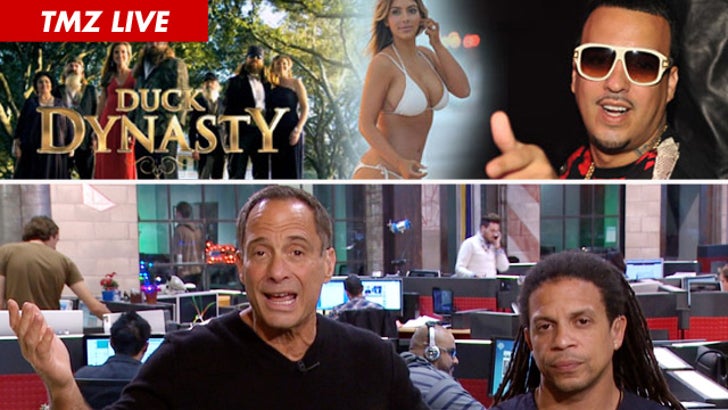 Phil Robertson's family is in solidarity ... they're not doing "Duck Dynasty" without him, and now A&E has a huge problem. It's the biggest cable reality show ever ... and if the Robertsons walk, they could lose several hundreds of THOUSAND dollars!
Plus, Kim Kardashian was near tears because she said people were focusing on her body too much -- so why in the world is she parading around in a bikini for setup photos???
And, French Montana is the latest celebrity to get a monkey as a pet -- and pisses off a lot of people in the process.

(0:00) "Duck Dynasty" family unites -- they're not gonna do the show without Phil ... and A&E is screwed.
(6:00) Shaunie O'Neal and Shaq at war over putting their kids on reality TV.
(10:00) Admitted addict Matthew Perry goes to war with a British journalist who doesn't think addiction is real.
(15:00) Kim K's white bikini pics ... Photoshopped as well?
(18:00) Walter Mitty's video promotion money all goes to relief in the Philippines -- we're joined by the guy who talked the movie's producers into letting him spend it that way.
(24:00) French Montana's new pet monkey has the newsroom up in arms.
(29:00) Kate Winslet threatens to sue after "Fathers4Justice" use her to prove a point over child custody.
(32:00) Casey Kasem's daughter joins us to give a grim outline of the time she was finally allowed to spend with him ... and how guns were involved.
(36:00) The floor is yours!
(41:00) Chris Brown -- bailing on rehab for a toy drive.