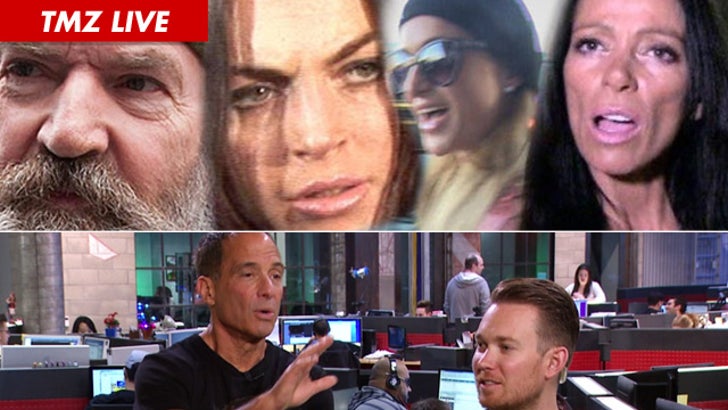 Duck Dynasty" star Phil Robertson's homophobic rant couldn't have been handled worse -- from A&E on down to the Cracker Barrel's brief boycott. We'll tell you what they SHOULD have done to get through it.
And, Lindsay Lohan and Paris Hilton's epic feud continues in the wake of the fight Barron Hilton claims Lindsay orchestrated -- see both Hiltons go off on LiLo ... one way better than the other.
Plus, "Real Housewives" star Carlton Gebbia is a huge witch -- and we're talking about on the show -- she joins us to explain why her religion of choice is Wicca.

(0:00) Everyone involved in the "Duck Dynasty" controversy handled it wrong ... we'll explain.
(10:00) Kim Kardashian gushes over Kanye West's brief cameo in "Anchorman 2" -- but the controversy ... why didn't Kanye acknowledge any of his fans leaving the theater?
(15:00) Dwyane Wade's giant ring for Gabrielle Union brings up a huge issue -- why do men need to buy expensive rings to prove their love?
(18:00) "Real Housewife" Carlton Gebbia is a practicing Wiccan -- she joins us to explain the mysterious and controversial religion.
(24:00) Paul Walker amid posthumous controversy -- we're joined by a man who started a petition to name the street after Paul ... which has taken on a lot of opposition.
(29:00) Chris Brown out and about while in rehab -- we'll tell you how he behaved.
(32:00) Barron Hilton rants about his involvement with Lindsay Lohan -- and his sister Paris reaffirms her feud with LiLo.
(36:00) The floor is yours!
(41:00) Audrina Patridge vs Cheryl Burke -- who wins the bikini contest? The answer may surprise you.