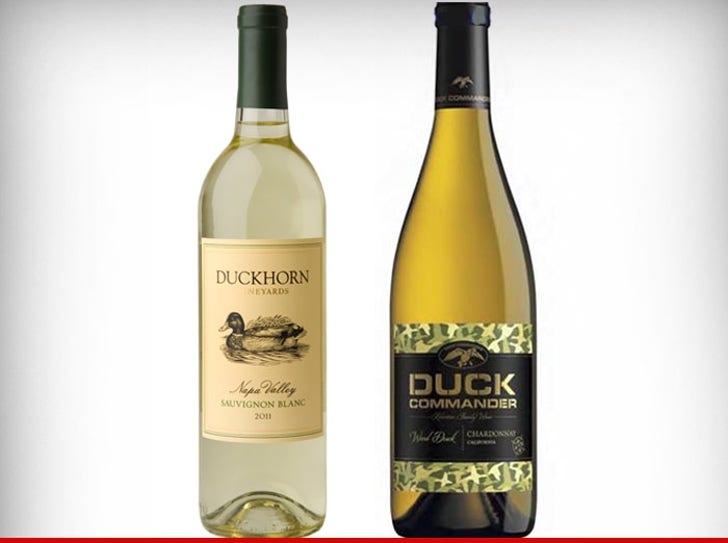 Duck Commander is being sued by a high-end Napa winery with a simple premise ... if it walks like a duck ... then we own it.

Duckhorn Wine Company claims in a lawsuit -- obtained by TMZ -- its expensive, ultra-premium wine brand -- which goes to nearly $100 a bottle -- is being diluted by Duck Commander's cheap, Walmart line of vino -- which goes for $9.99.

Check out the two labels. Duckhorn claims customers are getting confused by the 2 and buying the cheap stuff at its expense. What's worse for Duckhorn ... the company claims when you search online for duck and wine, all you see is Duck Commander.

And here's what really pissed off Duckhorn, which sold its wine years before Duck Commander. The D.C. blends cheapen the brand, with names like Triple Threat Red Blend, Wood Duck Chardonnay and Miss Priss Pink Moscato!

And to add insult to injury, Duckhorn grouses when Duck Commander launched its brand, it threw a drunken, redneck party in hoity-toity Napa ... a stone's throw from Duckhorn's vineyard.

Duck Commander scoffs at the lawsuit ... claiming that Duckhorn has no monopoly on the word "duck." They cite other duck trademarks, such as Long Duck, Duck Shack, Ugly Duckling, and Duck Duck Goose. But our favorites ... Orthoducks and Ducklebery Grunt!