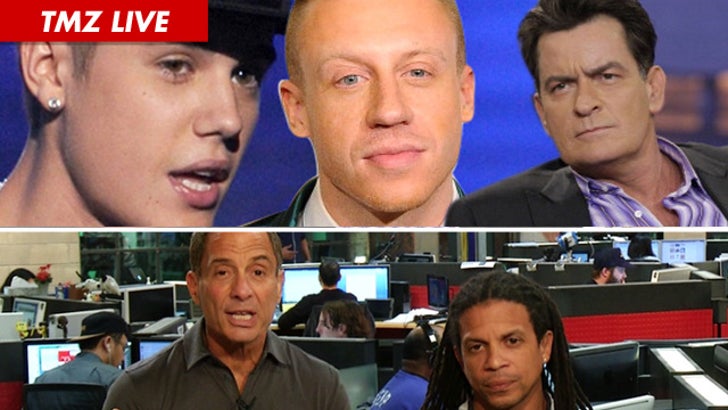 The case against Justin Bieber down in Miami could be falling apart, because the police report says he was drunk ... but we've learned his BAC was way lower than the legal limit. In fact, it was almost ZERO. Innocent typo or purposely fudged?
Plus, Macklemore caught in a Grammy controversy -- is he rap or not? The Grammys nearly booted him out of the category, even though he's been one of the most popular RAPPERS of the year. Is this reverse racism? Vibe magazine editor and chief Jermiane Hall joins us.
And, cops called to Charlie Sheen's house after reports of a rager ... but were shocked at what they found when they showed up.

(0:00) Justin Bieber's arrest -- more than one thing is fishy about the police report ... we'll explain.
(10:00) Macklemore NOT a rapper? Vibe editor and chief Jermaine Hall joins us to work it out.
(18:00) Disney star Roshon Fegan desperately wants to be know for something other than his mouse connection -- he joins us to explain how he's gonna do it.
(24:00) Sarah Silverman's new PSA uses Jesus to make a point about abortion -- too far ... or perfect way to drive home the point?
(28:00) Charlie Sheen's rager ... for four.
(30:00) Macaulay Culkin's father is on his deathbed.
(32:00) Selana Gomez gets all smuggy buggy about Justin Bieber's arrest.
(36:00) The floor is yours!
(41:00) Snoop Dogg smoke down under draws the attention of Australian firefighters.