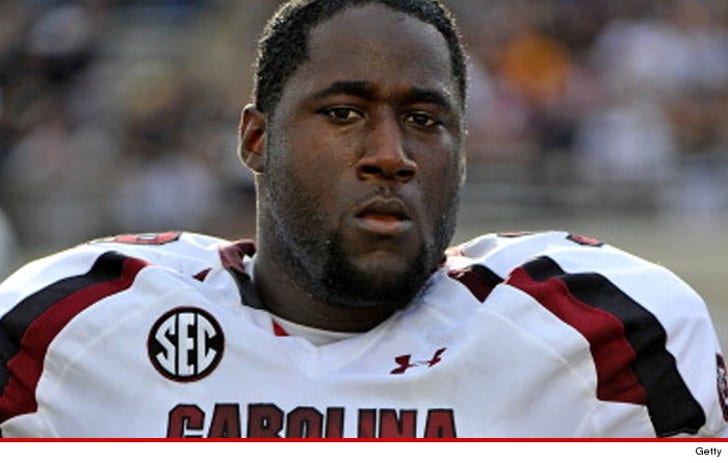 Either Kelcy Quarles is lying ... or a bunch of witnesses are severely mistaken -- because the NYPD says multiple people ID'd the NFL Draft prospect at Greenhouse nightclub the night of a massive brawl ... despite the fact K.C. says he wasn't there that night.

TMZ Sports spoke with Lt. Gimple who tells us ... investigators have spoken with multiple people who witnessed the attack on club promoter Michael Hauer on April 11 ... who say they spotted Kelcy at the club that night.

We broke the story ... Hauer was beaten so badly, he required multiple surgeries to repair severe facial injuries. While Hauer's lawyer claims Kelcy and his fellow University of South Carolina football teammate Victor Hampton had a role in the attack, cops say both men are only wanted for questioning at this point.

Lt. Grimpel tells TMZ Sports ... police are seeking to speak with everyone who was at Greenhouse Nightclub in NYC that night ... but they're having a tough time tracking down all of the witnesses because a significant amount of people at the club that night were from out of state.

There's more ... we're told the NYPD was not notified of the alleged attack until Tuesday morning ... several days after the incident. It's unclear why there was such a delay in reporting it to cops.

We're told ... as of Tuesday night, cops had not yet interviewed any of the football players allegedly involved in the incident ... but hope to speak with them ASAP.