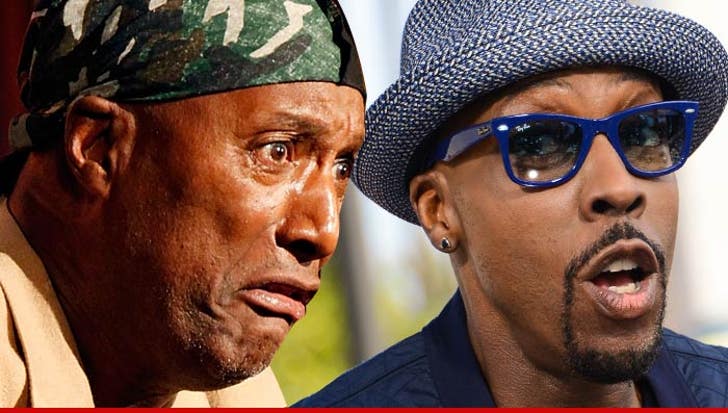 Legendary comic Paul Mooney got downright racial during a taping of the Arsenio Hall show Monday night ... spitting the N-bomb at an audience member in a performance that's being hailed as "the most embarrassing, disrespectful standup bombing ever."

Mooney -- who famously appeared on "Chappelle's Show" and wrote for Richard Pryor -- was booked to do a short standup bit on Arsenio ... but rambled on for more than 14 minutes in a bizarre routine that touched on everything from "Roots" to Obama to his admiration of an audience member's giant breasts.

But things really went off the rails when Mooney turned his attention to a black guy in the audience who he called a "bald-headed n**ga."

One person who was there tells us ... the crowd was stunned -- and sat in awkward silence as Mooney tried to transition into different material.

We're told it appeared producers were scrambling to cut him off and end the segment -- but Paul ignored the cues and kept going until a crew member used the P.A. system to interrupt him ... and a staff member went on stage to tell him to wrap it up.

One audience member tweeted about the scene -- saying, "OMG! I just witnessed THE MOST EMBARASSING, Disrespectful "standup" BOMBING ever by Paul Mooney @arseniohall I wanted to walk out!"

Eventually, Arsenio jumped in and helped end the segment in a respectful manner.

The bit that made air was severely edited down, but you could see that Mooney was rambling and making almost no sense. It ends rather abruptly after about three minutes. Check it out below.