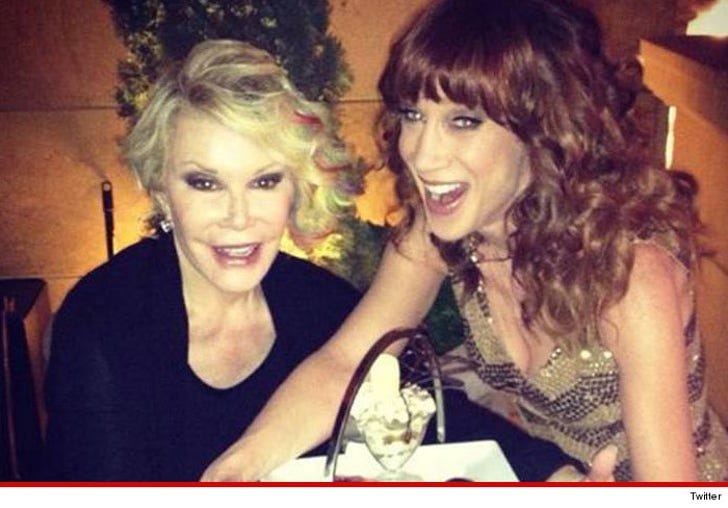 Celebrities from all facets of Hollywood are coming out to pay tribute to Joan Rivers.

Don Rickles -- Our dear Joan is gone. Knowing her, working with he and enjoying the fun times of life with her was special. She will always be in our hearts. She was a good friend to Barbara and I. Melissa, be strong and take care of your son Cooper. Joan…we will miss you.

Barbara Walters -- No one loved life, laughter, and a good time more than Joan. We would have dinner and laugh and gossip and I always left the table smiling. She was a brassy, often outrageous, and hilarious performer who made millions laugh. In private, she was the picture of elegance and class. I will miss her.

Donald Trump -- Joan Rivers @Joan_Rivers was an amazing woman and a great friend. Her energy and talent were boundless. She will be greatly missed.

Bret Michaels -- My deepest condolences to the family of @Joan_Rivers. She was a very funny lady and will be missed. #JoanRivers

Kathy Griffin -- A legend, a friend, a mentor, an icon, and wildly funny. One of a kind. RIP

Richard Lewis -- Joan, say it ain't so. Deep condolences to Melissa and loved ones. You were iconic and authentic from day one .

Nick Swardson -- RIP Joan Rivers. People don't know what a pioneer she was. Check out her documentary. Beautiful and heart breaking. Be at peace, Joan.

Jim Norton -- "Very sad news about Joan Rivers. Such a prolific, brilliant comic. She was more fearless than any of us."

Rob Schneider ‏-- #JoanRivers was thee trailblazer for ALL WOMEN COMICS WHO FOLLOWED!She proved a woman could be just as outrageous and as funny as the guys!

Sam Jackson -- Love Her or Hate Her, we're gonna Miss JOAN RIVERS! I always Respected her go for broke humor. One of a kind.R.I.P.

Ellen DeGeneres -- Joan Rivers will always be a pioneer. She paved the way for a lot of comedians. I’m very sad she’s gone.

Robin Quivers -- Joan Rivers was a mentor and a friend. Can't believe we won't be seeing her again. What a life.

Mike Epps -- RIP Television legend Joan Rivers. She was an incredible woman with a remarkable career. I pay my respects.

Howie Mandel -- She gave me my biggest break and inspired me in life. I can't believe that heart stopped

Anna Kendrick -- RIP Joan Rivers. Being publicly told that my dress is hideous will never feel quite as awesome. You will be truly missed.

Bette Midler -- Joan Rivers has died. What a sad ending to a brilliant and tragi-comic life; one of the bravest, and funniest of all.

Alec Baldwin --Very sad to learn about Joan Rivers, a pioneer for women in comedy.

Lena Dunham -- Watching Joan Rivers do standup at age 81 was incredible: athletic, jaw-dropping, terrifying, essential. It never stopped. Neither will she.

George Takei -- It is with sadness that I received the news that Joan Rivers has passed away. My deep condolences to her daughter Melissa and to all her family. Joan made us laugh, and understandably rubbed many the wrong way, as big voices in our midst so often do. But she moved to the beat of her own drum, was a pioneer in her field, and she will be missed.

Dennis Rodman -- I want to offer my condolences to Melissa and her family. As brilliant of a comedian her mother was Joan Rivers was even a better person. She Looked over me like a son when I struggled my first time on Celebrity Apprentice. She will be missed by millions.

Ricky Gervais -- RIP the mighty Joan Rivers. Funny and fearless. Truly one of a kind.

Geraldo Rivera -- Saddened by the passing of dear friend Joan Rivers. She was a brilliant comic who made the world a happier place. Irreverent and energetic, she could make a sphinx laugh.

Demi Lovato -- RIP Joan Rivers... You made fun of my boobies just last week and it was an HONOR. Thanks for making so many people laugh here on Earth.

Lewis Black -- So sad to have lost Joan Rivers.She may have been 81 but was still in her prime with a mouth that wouldn't quit. The silence is deafening

Laverne Cox -- So sad over the passing of @Joan_Rivers. U brought me a lifetime of laughter & were amazing to me the few times we met. RIP

Louis C.K. -- I feel very lucky that I knew Joan Rivers and I feel very sad that she's gone. She was a great comedian and a wonderful person. I never saw someone attack a stage with so much energy. She was a controlled lightning bolt. She was a prolific and unpredictable, joyful joke writer. She loved comedy. She loved the audience. She was a great actress and should have done that more. She loved living and working. She was kind. She was real. She was brave. She was funny and you just wanted to be around her. I looked up to her. I learned from her. I loved her. I liked her. And I already miss her very much. It really f***ing sucks that she had to die all of a sudden.

Katy Perry
-- What's the point of wearing all these dumb costumes if Joan's not here to rip them apart RIP Joan Rivers. You are a one of a one.