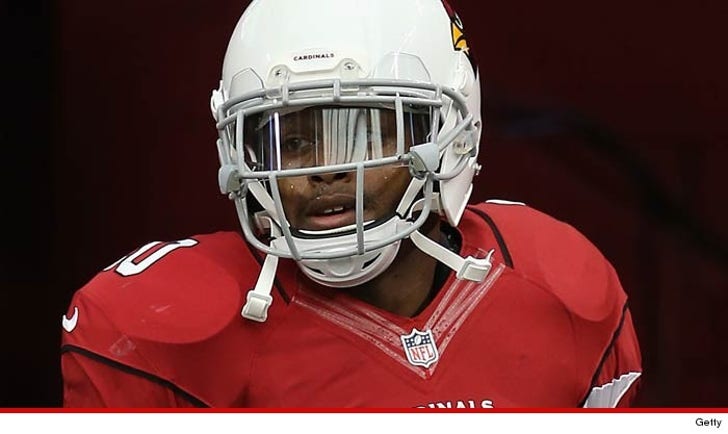 Arizona Cardinals running back Jonathan Dwyer headbutted his wife in the face and broke her nose during a domestic dispute in July ... this according to official court docs.

Investigators say ... Dwyer and his wife were in an argument on July 21st that escalated when he "attempted to kiss her and remove her clothing."

Dwyer's wife allegedly told him to stop -- but when he continued anyway, she bit his lip.

That's when cops say Jonathan headbutted her in the face, fracturing her nasal bone.

Dwyer's wife left the home -- but she says she returned when Jonathan texted her a picture of a knife and said he didn't want to live anymore.

According to the report, "She said he had threatened to kill himself in front of her and their child if she alerted the police to the assault."

The two got into it AGAIN the next day -- and Dwyer allegedly "punched his wife on the left side of her face with his right closed fist. He also began punching the walls."

Dwyer's wife also says the NFL player grabbed a shoe and threw it at their 17-month-old child -- striking him in the stomach.

When Dwyer's wife tried to call police -- the NFL player allegedly grabbed her phone and threw it out off the second story of their home.

Witnesses say they heard Dwyer throw the phone -- and could hear is wife yell, "He f**king hit me."

Witnesses also told cops they saw bruising and swelling on her face.

Dwyer's wife fled the state -- and says she finally called cops in September when she felt safe. Cops obtained her medical records which show the broken nose.

For his part, cops say Dwyer admitted there were two incident with his wife ... and admits she bit him on the lip.

He also admits he punched the wall in the home, threw his wife's phone ...and had texted her a photo of a knife with threats of suicide.

However, he denies any physical assault.

Dwyer was arrested yesterday -- and is being charged with various counts of assault.