Ryan Gosling and Eva Mendes' baby name may have been inspired by one of the characters she played in a Mark Wahlberg movie.

Gosling and Mendes named their daughter Esmeralda Amada ... according to the baby's birth certificate, obtained by TMZ.

Amada was the name of Eva's character in "We Own the Night" -- and Esmeralda, well ... maybe she's a big fan of the '96 Disney flick "The Hunchback of Notre Dame."

And we also got the birth certificate of Wyatt Isabelle Kutcher, the newborn of Ashton and Mila Kunis. Nothing that interesting ... except for the doctor who delivered the kid. She's Ruth Cousineau, a big celebrity doctor in L.A. She's also been criticized on Yelp for favoring celebs. One person wrote:

"And God help you if a celebrity walks in -- late for her own appointment. She'll be whisked right in ahead of you, and given every attention and royal treatment until you actually put your clothes back on and threaten to leave." 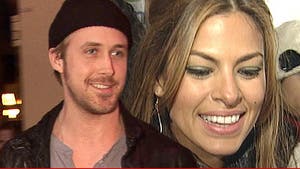