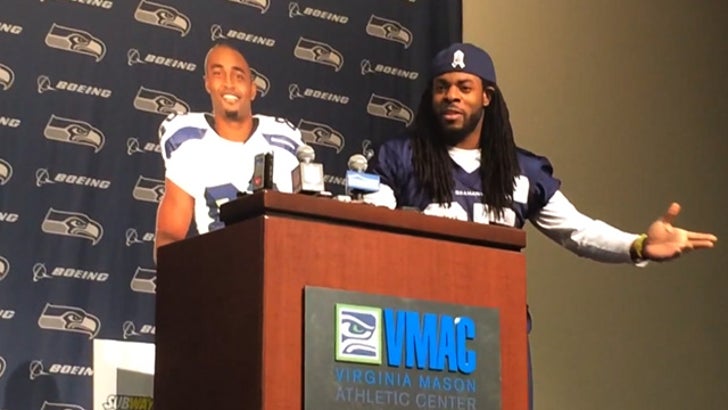 Richard Sherman slammed NFL Commissioner Roger Goodell over the massive fine he dropped on Marshawn Lynch for not talking to the media ... by accusing the league of being two-faced.

Seattle Seahawks Sherman and Doug Baldwin (hiding behind a cardboard cutout of himself) held a pretty shocking news conference today where they openly mocked the league policy forcing players to talk to reporters. The duo talked excessively, but only about things the league does NOT want them discussing.

They shouted out personal sponsors -- including Beats by Dre -- which the league banned players from wearing on gameday because of a deal with Bose. Then Sherman went nuclear, calling out the league for saying it's dedicated to "player safety" ... while making them play 2 games within 5 days.

You gotta see this -- pretty sure Sherman's gonna be a few thousand bucks lighter in the pockets once the commish sees it.