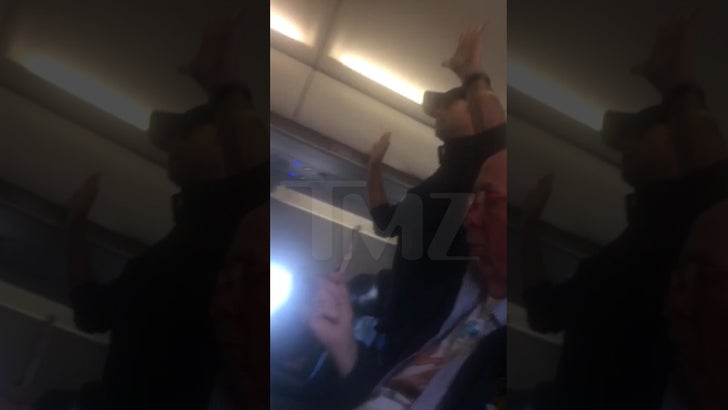 TMZ obtained video of the American Airlines passenger who went on a bizarre rant referencing the 9/11 attacks ... forcing his fellow passengers to subdue him.

Shortly after the Philly bound flight left LAX ... the man walked to the front of 1st class, and started shouting about government corruption and psychological warfare. According to witnesses he said, "We will all see the truth, and I will be famous today."

We're told 2 men who appeared to be regular passengers jumped up and restrained the man, wrapping a belt around his fists. Then he got even angrier ... shouting he had a gun, and yelling about 9/11. Even after he was restrained, we're told he pointed "finger guns" at people.

The pilot circled for more than an hour to dump fuel, before diverting to Phoenix ... where Homeland Security Officers came aboard and removed the suspect. In the video, you can see him moving slowly down the aisle with his hands up.

We're told other passengers were worried about his luggage being on the plane for fear of explosives, but the flight crew announced it was all removed before the flight continued to Philly.