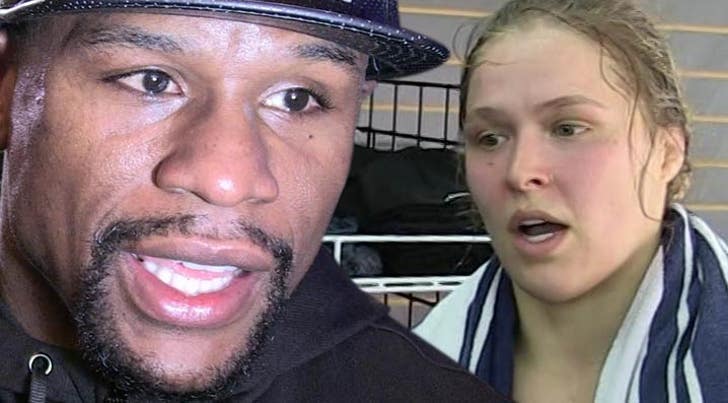 Yeah, you read that headline correctly ... Floyd Mayweather is DEFENDING Ronda Rousey -- saying he doesn't "think it's cool" that people ripped into her after her loss to Holly Holm.

Kind of a shocking position for Floyd to take, considering the amount of smack talk between Floyd and Rousey over the past year.

Here's what Floyd told FightHype.com (tipped our way by our friends at BSO):

"I don't think it's cool how everyone is trolling her on social media. Certain things you have to learn. People will love you on Friday and then Sunday morning, it's nothing but negative comments and people making jokes and people making fun about you, which I don't think is cool. I've never been on the other side, so I don't know how it feels. I'm pretty sure she's a very, very strong person, but we still have to take into consideration that she has feelings."

He added, "Just to set the record straight. I don't have anything against MMA fighters. It's just like boxing; you win some, you lose some. A true champion can take a loss and bounce back."

"Everything happens for a reason. This was already written. Listen, if God says, 'In Floyd's career, I don't want him to lose,' you know what? I wasn't going to lose. That doesn't mean that I haven't took a loss before. I'm not talking about boxing; I'm just talking about life."

"When you lose a loved one, that's taking a loss. I think that everything is just a learning experience. In due time, she'll be able to bounce back and make some noise again in mixed martial arts."