Bono and U2 shared the spotlight in Paris with Eagles of Death Metal ... whose concert turned into a bloodbath during the Paris terror attacks.

U2 was performing its own show -- which was postponed after the attacks -- when they introduced EODM. Bono told the crowd, "They were robbed of their stage 3 weeks ago and we would like to offer them ours tonight."

Both bands jammed the Patti Smith classic, "People Have the Power" -- and the audience ate it up.

The concert was recorded, and will air Monday night on HBO. 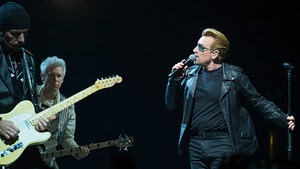