Alan Thicke died of a "ruptured aorta" -- a massive tear in the body's largest artery -- according to his death certificate.

According to the official doc ... doctors desperately tried to save Alan's life by performing a median sternotomy -- it's a surgical procedure where doctors literally crack open the sternum to open up the area around the heart and lungs so they can operate.

Alan was stricken with the heart attack at around 11:15 AM last week. He died 3 hours later in surgery at Providence St. Joseph's Medical Center in Burbank. Time of death was listed at 2:14 PM.

TMZ broke the story ... Alan died of a heart attack last week while he was playing hockey with his 19-year-old son, Carter. He was transported to Providence St. Joseph's Medical Center and died there. 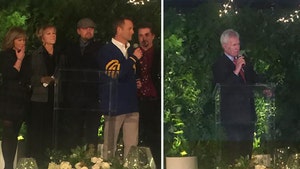 Britney Spears My Dad Bullied Me and Took $6 Million