Mystic Mac's gone back to the buzzed head ... the same look he had in his crazy win over Nate Diaz at UFC 202.

Of course, Conor's also suited up in a clean 3-piece ... a blue and purple joint from his personal designer David August. He's also got on his classic stunner shades -- even though he's indoors.

McGregor looks pretty confident struttin' into T-Mobile arena with the fam ... but did he have a better entrance than Floyd Mayweather? 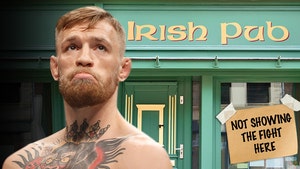