Miami is starting to look like a city that's underwater due to massive flooding from Hurricane Irma ... and some of the footage of the city is insane.

Store owners in #Miami watch as their store is surrounded by a wall of water. What a terrible and uneasy feeling. #HurricaneIrma #Irma @WFLA pic.twitter.com/F0wALvDpJz

Streets in downtown Miami are literally becoming rivers, and even shops and storefronts are getting buried in water. This video shows store owners looking at rising currents right outside their own window.

Sources at the National Weather Service tell us the surge of water in Miami has gotten as high as 6 feet.

Downtown Miami looks like a watery war zone. This is more than 100 miles from #Irma's eye pic.twitter.com/F71QYi0Vd2

The city is flooded beyond recognition, and is even starting to cause damage to some structures. A piece of American Airlines Arena has been torn down from the high velocity winds. Two cranes at the top of a high-rise in DT have snapped off as well ... but luckily didn't plunge down below.

Crane collapse in northern sector of downtown #Miami isn't harming anyone, yet... pic.twitter.com/anf9TKOb02

And as you might imagine, trees are falling over left and right in Miami and surrounding areas.

Irma is expected to rip into the rest of Florida through Sunday. 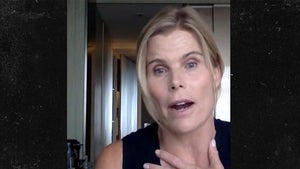