Welcome to "What the HELL are are you doing?!" -- starring LSU RB Derrius Guice ... who nearly flipped an ATV trying to pull off a 4-wheeled trick and almost CRUSHED himself in the process.

If you didn't know, Guice is an absolute stud (he led the SEC in rushing last year, even while LSU had this other guy), a legit Heisman candidate, and a surefire 1st-rounder in the NFL draft next year.

That, of course, could all change if he were to do anything stupid ... LIKE HURTING HIMSELF ON A FREAKIN' ATV ... something that almost happened in a video Guice posted to his own Instagram account!

The stupid machine flips, almost crushing DG and his passenger, but luckily it didn't -- meaning he'll be ready to go against Mississippi State on Saturday, LSU's first SEC game of the year.

Guice assured his fans that "everything is fine" -- adding, "Before y'all start commenting BS. Let me have my fun. I won't get hurt so shhh." 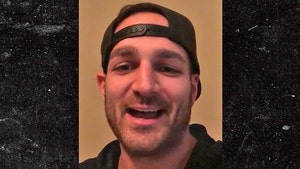