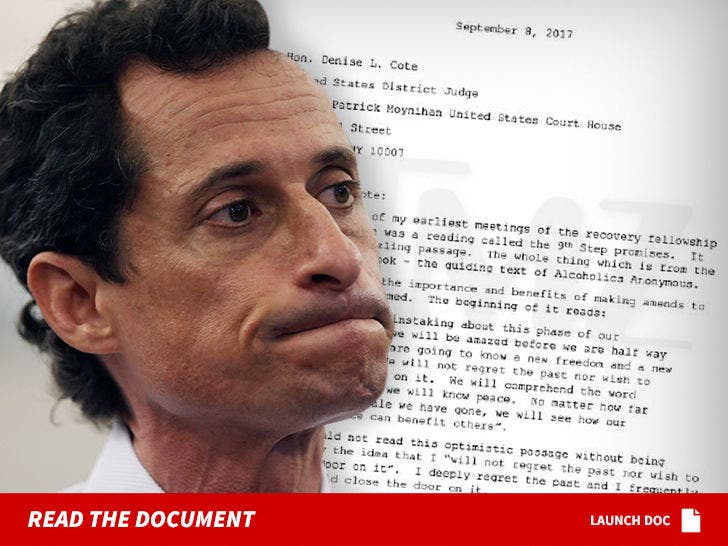 Anthony Weiner says he's turned a corner in his recovery, and he's asking a judge to show leniency when he's sentenced for sending obscene material to a minor.

Weiner fired off the letter to the judge in his case, saying, "I am 345 days off my destructive behaviors and have a daily practice to help me never return to them." Those behaviors include his multiple sexting scandals ... the last of which involved his lewd online communication with a 15-year-old. Weiner pleaded guilty, and will be sentenced Sept. 25.

The letter, obtained by TMZ, contains repeated references to his treatment and deep regret for continually humiliating his wife, Huma Abedin, and crushing her aspirations -- a clear reference to her role as Hillary Clinton's longtime aide.

Weiner also describes how he plans to explain his actions to their toddler son when he gets older. He writes, "I'll tell him I was a guy who did a very bad thing to a young person I never met. I'll tell him I put his amazing mother through years of trauma and broke her heart."

Huma filed for divorce the day Weiner entered his guilty plea. There's no talk of reconciling with her in the letter, but he sounds determined to mend fences with her.

The judge could give Weiner a maximum sentence of 10 years in federal prison, although sentencing guidelines recommend 21 to 27 months.

He closed the letter with ... "Every day I quietly do what I can to keep getting better, and to fix the damage I've done. I have much more work to do. Please show me grace so that I may continue."