Kylie Jenner needs to get on the horn to her IT guys to update her website ASAP because, as it stands, her blind customers are getting screwed ... according to a new lawsuit.

Antoinette Suchenko says she's been legally blind for more than 20 years, and uses screen reader software to navigate the Internet -- but in the suit she says Kylie's cosmetics site isn't compatible. As a result, she's having a hard time bagging any of Kylie's uber-popular makeup products.

She's not looking for any cash -- Antoinette says she just wants Kylie's site to get up to standards required by the Americans with Disabilities Act. She says doing so will be a major W for Kylie's bottom line ... sales. She's suing Kylie Inc., not KJ herself.

As we reported, a similar suit was filed last year, by someone else, against the DASH Store's website. 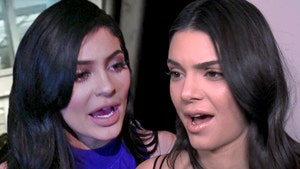