2:06 PM PT -- Bono has issued a statement on his condition, saying ... "I’ve seen a great doctor and with his care I’ll be back to full voice for the rest of the tour. So happy and relieved that anything serious has been ruled out." He also apologized to his fans who missed out on his Berlin show, and promised to return on November 13th.

Bono pulled the plug on his concert Saturday night after his voice started sounding like a scratched-up LP.

U2 hit the stage in Berlin and after they were a few songs deep into the show ... Bono waived the white flag.

What was weird ... Bono sounded fine at the beginning of the concert, so whatever happened happened super quick.

The folks at the Mercedes-Benz Arena were understanding as Bono seemed to give the crowd options. Either reschedule, or take a 10 to 15 minute break. It's unclear what he meant by the break, since it was obvious his voice wasn't coming back anytime soon. It sounds like he was hoping his voice would come back, but that was clearly a pipe dream. In the end, the stage went dark.

The band released the following statement: "We're so sorry for tonight's cancellation. Bono was in great form and great voice prior to the show and we were all looking forward to the second night in Berlin, but after a few songs, he suffered a complete loss of voice. We don't know what has happened and we're taking medical advice." 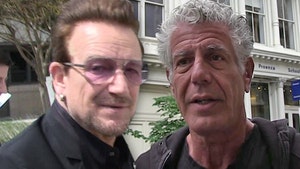 U2 Dedicates Song to Anthony Bourdain During Apollo Theater Show 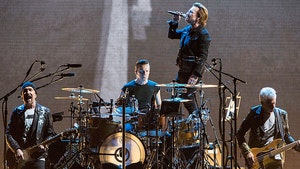 U2's 'Live' Grammys Performance Won't Be So Live After All