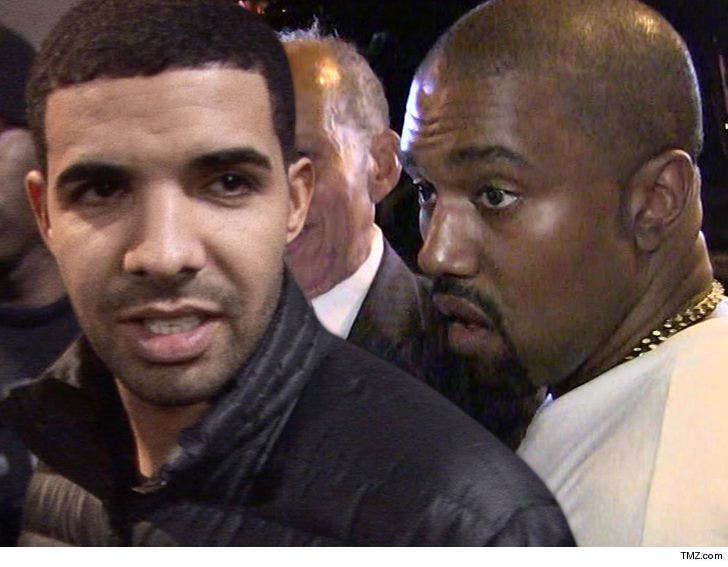 Drake spilled a whole lotta tea about this past summer's beef with Kanye West and Pusha T ... telling LeBron James it all started with what he thought was a friendly meetup in Wyoming ... then got very dark.

Drake opened up to Bron and Maverick Carter on their new HBO show "The Shop" on Friday about what went down with Ye ... which ultimately led to diss tracks, competing album drops and the big reveal -- Drake has a son.

There's so much info dished out it's hard to know where to begin, but Drake suggests the nastiness started when Kanye essentially lured him to Wyoming to record music ... but ended up backstabbing him and betraying his trust.

Drake claims he opened up to Ye about personal stuff -- including his son -- and shortly afterward news about his son broke. This was followed by Kanye announcing his and Pusha T's album releases ... which were very close to Drake's release date for "Scorpion."

Drake says this is when he realized Kanye was "manipulative" and trolling him, so he tried to back away ... but it didn't stop.

As you know, next came Pusha T's diss track "Infrared," which Drake says he actually helped him work on in Wyoming, adding ... “I was just there with you as friends helping you, and now you’re dissing me? So I’m like, ‘Man, this is dark.'”

He also blasts Pusha, more than anything, for crossing the line -- not with his lyrics about Drake's son or being a deadbeat dad -- but for mentioning Drake's producer Shebib's battle with multiple sclerosis.

Drake suggests Pusha will get what's coming to him eventually, but that's when he knew it wasn't worth it to respond with a diss track of his own.

There's a lot more, including Drake showing Bron a photo of his son, in the full interview below.