Hillary Clinton is still firmly in Bill Clinton's corner more than two decades after his sex scandal with Monica Lewinsky ... with HC now saying he didn't abuse his power over her.

The former Secretary of State and two-time presidential hopeful went to bat for her husband Sunday during an interview with CBS, in which a reporter asked if then-President Clinton should have resigned after being impeached for lying about his affair with Lewinsky.

Her answer was telling ... "Absolutely not." The reporter follows up by asking if his relationship with Lewinsky might've been an abuse of power. She simply says, "No, no."

HC was presented with one last premise that she quickly and brutally deflected at Lewinsky's expense, with the reporter suggesting that a sitting president cannot have a consensual relationship with an intern because the power imbalance is too great.

She quickly interjected with, "... who was an adult" and pivoted to asking why there hasn't been such an expansive probe into the allegations of sexual misconduct against Trump. 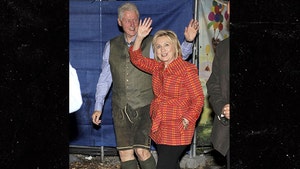 Bill and Hillary Clinton Do Oktoberfest