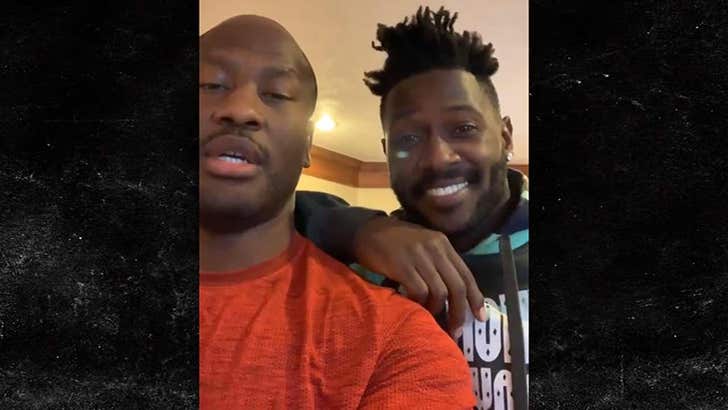 Is a bombshell Antonio Brown interview on the way???

Sure seems like it ... 'cause the Steelers superstar was watching Mike Tomlin's press conference Wednesday with James Harrison and promised a "big interview" is coming.

A.B. created quite the controversy in Pittsburgh over the last few days ... reportedly getting into a spat with teammates at practice, getting benched for Sunday's game AND requesting a trade.

Things have gotten so bad ... Ben Roethlisberger says Brown won't even call him back -- and Tomlin said he's "disappointed" with the way the WR's been acting.

Brown seems ready to tell his side of the story ... 'cause while he was watching his head coach field questions about him from reporters, he said an "exclusive" interview is on the way.

"Stay tuned, we about to do this big interview," Brown says.

Seems the interview could be REAL damaging to the Steelers ... 'cause Harrison's made it clear he's not a huge fan of Tomlin's -- and Brown's certainly not the coach's biggest supporter right now either.