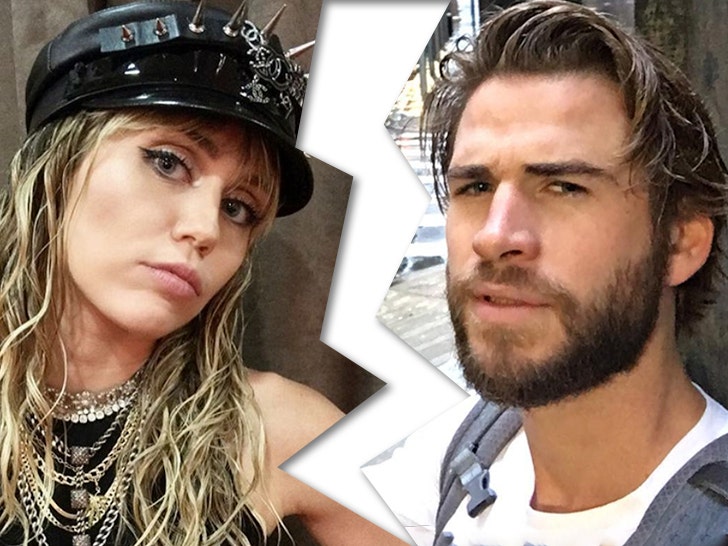 Miley Cyrus and Liam Hemsworth are over -- the longtime couple, and recent newlyweds, have split less than a year after tying the knot.

A rep for Miley told People Mag, "Liam and Miley have agreed to separate at this time. Ever-evolving, changing as partners and individuals, they have decided this is what’s best while they both focus on themselves and careers. They still remain dedicated parents to all of their animals they share while lovingly taking this time apart. Please respect their process and privacy."

The news comes shortly after Miley posted a photo of herself where she doesn't appear to be wearing her wedding ring. She captioned the pic, "Mute me if you don't want SPAMMED."

Miley and Liam have had an on-again, off-again relationship since 2009 -- when they first met. He proposed to her in 2012. They broke up, and then got back together 2015. As we reported ... they obtained their marriage license in December of 2018 before finally pulling the trigger.

The writing might've been on the wall ... Miley told Elle magazine earlier this year about how she doesn't "fit into a stereotypical wife role," while also revealing she's attracted to women.

As for Liam ... he's been pre-occupied pumping iron with his brother, Chris, and plugging instant coffee. It's hard to tell, but it doesn't look like he's wearing a wedding band in this clip from a week ago. He last explicitly referred to Miley as his wife -- and himself as her husband -- in late May, and posted a photo of the two of them in June.

Liam doesn't appear to have commented on the split directly. No word yet on whether divorce is in the cards -- but if this sticks, it's almost certain to happen. It doesn't look like either of them have filed for a divorce in Tennessee yet, where they got hitched.