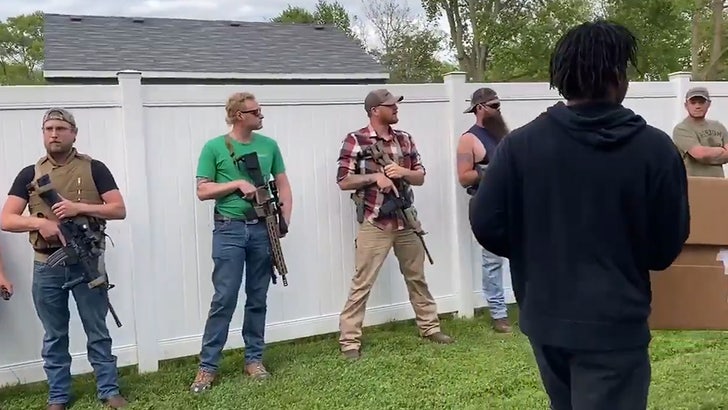 An eerie scene during a BLM rally is going viral, because it looks like a scary throwback to the '60s -- a line of armed white residents trying to intimidate protesters.

This went down in Crown Point, Indiana ... where a group of mostly college students had just finished marching, and took a back alley bike path to get back to their cars. As they walked and made their way, earlier this week, they were greeted by a lineup of at least a dozen white men and women ... many brandishing guns, and all staring down the students.

Indiana is a licensed open carry state, so everything you're seeing here is legal. Still, it's pretty menacing -- you see the protesters walking by with their signs out, but not chanting or even speaking. The group of older adults along the fence were also dead silent as they eyeballed the BLM group.

At one point, the demonstrators came across a couple of cops who were standing toward the end of the line ... and watched as they passed. The protester who's on camera here with the sign is Cedric Caschetta, and he tells us it was actually police officers who suggested they take the bike path in order to avoid a longer and more rowdy route back to their vehicles.

He says the officers escorted them all the way through.

Cedric says he and the rest of his group made sure to keep calm in the situation, as he says he felt at least a couple of the armed residents were trying to get reactions out of them.

He also says he never feared for his safety after a full day of being on the front lines of the protest in downtown Crown Point.

Tough young'ns, no doubt ... and a stark reminder not everyone in the country's ready for change.