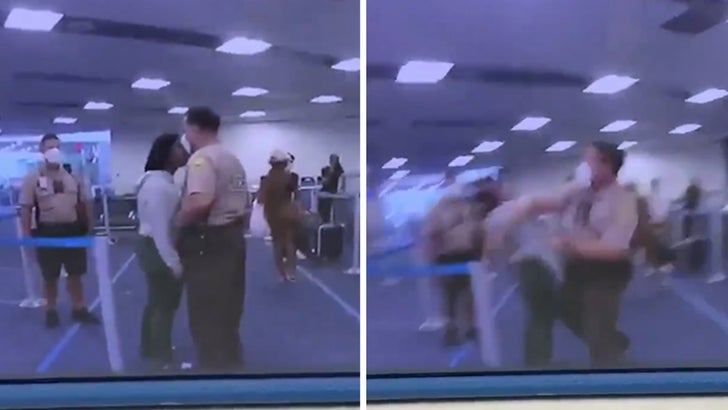 A Miami-Dade County police officer is on video violently striking a woman in the face at the airport as she approached him during an argument ... he's claiming self-defense, but the brass ain't buyin' it.

According to the police report ... the cop, along with another officer, responded to a call of a disorderly customer at an American Airlines gate Tuesday at the Miami International Airport.

That customer -- the woman seen in the video -- was allegedly late to board her flight to Chicago so she was refused boarding and told to go to the rebooking counter. Cops say she became upset when she was told she'd have to wait until the next day and began threatening the AA employee, who called police.

The report says the 2 cops arrived to escort her away from American but advised her she could book a flight with a different airline, at which point she allegedly yelled more threats toward the AA employee ... this is roughly where the body cam video begins.

In the short clip ... you see the woman in a verbal argument with the officer, which quickly escalates as she walks toward him and asks, "What you gonna do?"

The cop steps back and without warning delivers a blow to her face, and she's quickly taken to the ground. As she's being arrested, you hear the officer say ... "She headbutted me!"

According to the police report ... the woman "aggressively approached" the cop and violated his personal space, then allegedly bumped him with her body and struck him "with her head on the chin." The cop claims he then hit her with an open-hand slap to the face. This is clearly NOT the way officials see it.

Director of the Miami-Dade Police Department, Alfredo Ramirez III, has responded to the incident, saying ... "I am shocked and angered by a body cam video that I just saw involving one of our officers. I’ve immediately initiated an investigation and ordered that the involved officer be relieved of duty."

He adds ... "Actions such as these undermine the hard work that we have invested in our community and causes my heart to break for our community and for the vast majority of our officers who dedicate their lives to serving our County. This will not stand and I assure our community that any officer acting in this vain will be held to account." 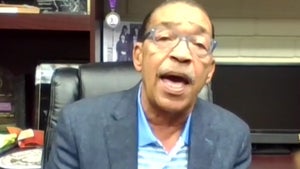