Corey LaJoie's "Trump 2020" car barely made it out of the garage Sunday ... the freshly painted ride was totaled in a massive pileup just 16 laps into the Brickyard 400.

The scene was wild ... as several cars tried to squeeze their way onto pit road during the first few minutes of NASCAR's big race at Indianapolis Motor Speedway -- they all slammed into each other.

It's a PILEUP on pit road at @IMS!

LaJoie was caught up in the middle of the mess ... and his "Trump 2020" car didn't survive -- suffering too much damage in the wreck to keep racing.

At least five others, including Martin Truex Jr. and Ricky Stenhouse Jr., were also forced out of the race because of the crash.

A huge mess at @oreillyauto Pit Reporter @BradGillie's in. He reports a jack is in the middle of pit road. Both JTG cars, Allgaier, Truex Jr and Corey LaJoie were involved. One of Ryan Blaney's crew member was hit during the incident. pic.twitter.com/FjttIutKTF

It's a big disappointment for LaJoie's Go Fas Racing team ... just days before the big event -- team owner Archie St. Hilaire had said he was excited as hell to see the ride compete.

"As a Trump 2020 supporter, this team will do everything possible to secure victory on and off the track electing President Donald Trump to a second term," St. Hilaire said. "Let us bring this country back and Keep America Great!"

Although totaled Sunday ... as part of the team's agreement with the pro-Trump Patriots of America PAC sponsor, LaJoie's team is expected to race in a "Trump 2020" paint scheme 8 more times this season.

As for Sunday's race ... Kevin Harvick won the whole thing, while Bubba Wallace -- who had famously raced in a "Black Lives Matter" car earlier this season -- finished 9th. 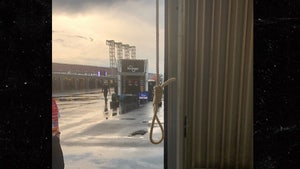