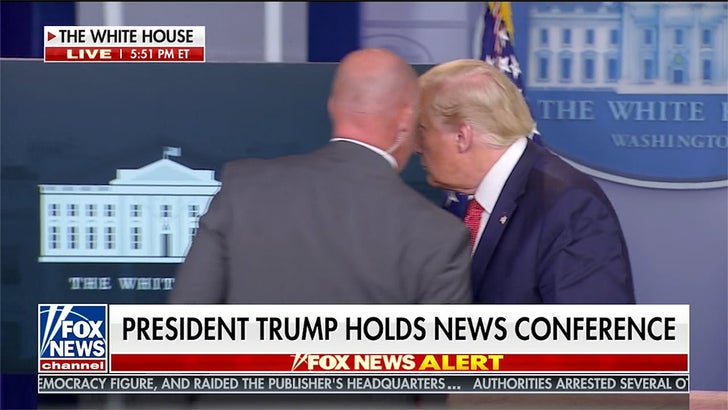 4:24 PM PT -- A law enforcement source tells TMZ the suspect was believed to be armed and was shot in the upper-right torso. The suspect was taken to the hospital and is in critical condition.

President Trump was abruptly removed from his coronavirus briefing in what seemed like an immediate threat -- but he returned shortly to say it was due to a shooting outside the White House.

#BREAKING: Suspect shot by Secret Service outside the @WhiteHouse pic.twitter.com/H6m2V4Hplo

Trump's Monday evening news conference was interrupted by a Secret Service agent telling him he needed to leave, and there were reports the WH was on lockdown briefly as the press was asked to clear the lawn outside.

However, the Prez came back minutes later and told reporters there was a shooting outside and someone was taken to the hospital. He says Secret Service agents were responsible for the shooting, which he claims occurred just outside of the property at 17th and Pennsylvania Ave.

Video showed law enforcement tending to the person on the ground.

Trump says he waited in the Oval Office until he got the all clear, and told agents he wanted to return for his regular Q&A.

He went back to discuss the COVID-19 pandemic -- or as he still puts it, the "China virus" -- and the economy.

Law enforcement is still on the scene investigating the shooting.