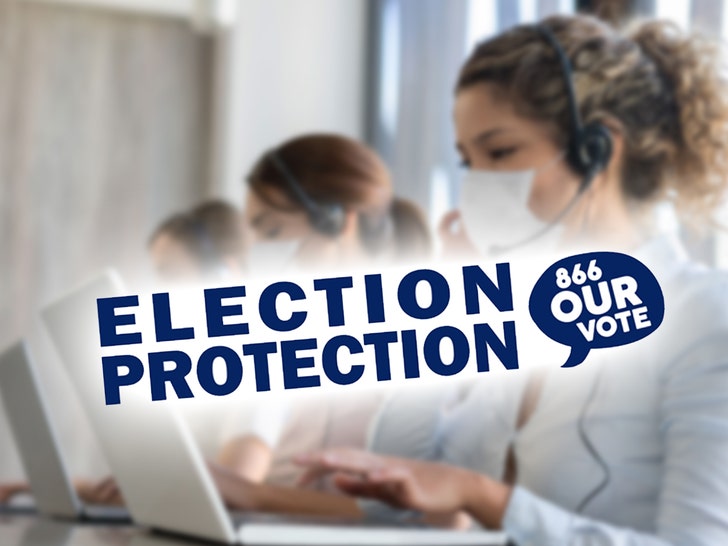 A professional hotline dedicated to reporting funny business at the polls was inundated with calls alleging voter intimidation this election cycle ... far surpassing anything they saw 4 years ago.

Election Protection is a safe haven for whistleblowers who see something fishy or downright illegal at polling places all over the country -- and according to the Lawyers' Committee for Civil Rights Under Law (a nonprofit that manages the hotline) ... 2020 was crazy busy.

A rep for the Lawyers' Committee tells TMZ ... since the month of October, their collection of 40k-plus legal volunteers fielded upwards of 115k calls about potential voter suppression -- which pales in comparison to the total 150k or so calls they got for the ENTIRE year in 2016.

As of this past weekend -- when early voting was in full swing in a majority of states -- we're told EP got a call from out from Hanover, VA about what appeared to be a militia group holding a parade in front of a polling place ... which freaked out some people.

Lawyers' Committee adds that officials on the scene noted there were BLM counter-protesters on hand too -- and that voters were feeling uneasy about the whole thing in general. We're told local authorities were alerted to check it out and make sure nobody was being harassed.

On Tuesday, Lawyers' Committee tells us they received several calls regarding alleged voter intimidation in Florida ... from counties like Hillsborough, Brevard, Palm Beach and more. In Orange County, we're told they got a report of 5 pickup trucks blocking the entrance to a polling place there ... something Election Protection says they flagged to officials.

There are more incidents they were made aware of on Election Day, including pollsters taking temp checks in Virginia -- which some folks thought was meant to keep people from voting -- as well as a heavy reliance on paper ballots, misappropriated voting machines and delayed opening times at polling places in Pennsylvania, Georgia, Ohio and other states.

The point here is that Election Protection -- despite being flooded with calls -- was dedicated to making sure people have a fair shot to cast their ballots. And, their cause has gotten the backing of some big-name celebs, like Chelsea Handler ... who recently plugged 'em.

You Might Want to Rethink White House Politix Controversial S#!T